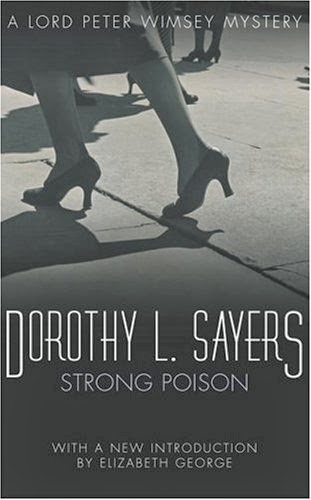 Another delightful murder mystery starring Lord Peter Wimsey. Like Clouds of Witness, the story is about getting someone off a charge of murder rather than (or as well as) looking for a killer among suspects. That makes it immediately warmer and more benign than most other detective adventures. Plus our detective has fallen in love...

Strong Poison begins at what seems to be the end of the adventure, with the summing up of evidence in a trial for murder. Harriet Vane, writer of popular murder mysteries (just like Sayers herself), is suspected of killing her no-good rapscallion boyfriend - like something out of one of her own books.

Wimsey is not involved in the case, he's just a fascinated observer. When the jury can't decide whether Vane is innocent or guilty, he steps in to prove her innocence.

Published in 1930, the book feels racingly modern, the plot tied up in all kinds of things of its time: seances, socialism and speakeasies, with motivations all bound up in "what will people think". It's only a post-war perspective that makes an early clue so striking: when Urquhart speaks of euthanasia as kindness, he's expressing what was then a widely held view.


"It always seemed to me a cruel thing that one may not put these poor old people out of the way, as one would a favoured animal."
Dorothy L Sayers, Strong Poison, p. 126.

I loved the idea of the "cattery" (first described pp. 54-5), an office of smart, professional spinsters who help Wimsey foil criminal schemes. It's like the Baker Street irregulars in Sherlock Holmes, but without the sense of exploitation (as I discussed in reviewing The House of Silk). I especially like the plot zigzagging off as one of these women takes central stage and has a mini-adventure. Leaving London for the countryside is a much bigger deal - there is communication by post and telegraph, but she's basically out on her own. There's some nice character stuff about the pricking of her conscience over whether to dupe a nurse if it will help solve the mystery.

But there's also something strange about the book being contemporary. Written and set in 1930, there's a moment when it jumps to the future:


"Wimsey was accustomed to say, when he was an old man, and more talkative than usual, that the recollection of that Christmas at Duke's Denver had haunted him in nightmares, every night regularly, for the following twenty years."
Ibid., p. 141.

It's perhaps stranger still coming so soon after Wimsey has joked to a socialist about what the future might hold:


"People will point me out, as I creep, bald and yellow and supported by discreet corsetry, into the nightclubs of my great-grandchildren, and they'll say, 'Look, darling! that's the wicked Lord Peter, celebrated for never having spoken a reasonable word for the last ninety-six years. He was the only aristocrat who escape the guillotine in the revolution of 1960. We keep him as a pet for the children.' And I shall wag my head and display my up-to-date dentures and say, 'Ah, ha! They don't have the fun we used to have in my young days, the poor, well-regulated creatures."
Ibid., p. 99-100.

Far odder, though, is Wimsey's interest in the suspect. He seems to have fallen for Vane at first sight, and there's no indication what makes him so sure she didn't do it. On the few occasions they meet while he struggles to save her, I got little sense of her character, or of a spark between them - she merely seems baffled at Wimsey being so head over heels.

Vane is, understandably, wary of Wimsey. Besides, whether or not she's a killer, the case has brought out all sorts of lurid detail about her past. There's also the delicate matter of obligation: if Wimsey can save her, does she then owe him a date - or is that horribly unseemly? As a result, it's hard to believe in his infatuation or that there's any hope for the two of them. It just feels rather odd.

Far better played is the romance between Wimsey's sister and an honest copper who dare not speak of how he feels about a woman so far above his station. Wimsey is an unlikely Cupid, having it out with them both to get their act together, but it's a warm, funny sub-plot that lifts the whole story above the brutal, nasty murder.
Posted by 0tralala at 6:07 pm