Episode 696: Doctor Who
First broadcast: 8.30 pm on Monday, 27 May 1996
<< back to 1995
Gosh. Yesterday afternoon, with almost no warning, BBC iPlayer put up a new mini-episode of Doctor Who, The Night of the Doctor – starring Paul McGann.

This is the second screen appearance of McGann's eighth Doctor (not including clips from his first appearance being used in other episodes). Watching it on the Dr's iPad, and then seeing Twitter and Tumblr explode, made me realise what a different age the Doctor Who television movie belongs to.

I first knew about it on 10 January 1996, when the Lancashire Evening Post announced McGann's casting as the Doctor on their front page, in a tiny box-out I just happened to spot. I was 19, living in Preston in my second year at university.

I didn't have a mobile phone – no one I knew did. There wasn't a computer in our house let alone any internet. If I knew anyone with an email address, I didn't know what it was. Instead, a nice friend from home (who was at another university) printed out Doctor Who news pages and sent them to me in the post so I could keep up with the “latest” news on the movie. As a result of that, I tracked down the computer rooms in my department and visited about once a week – which at that time felt like I was following developments closely.

Even then, Doctor Who Magazine was often the first place to learn what was really going as, as opposed to the rumour. It was often ahead of the game – and promised features and interviews from the set! But look at that first cover, with Paul McGann holding a... is that an ashtray? If it isn't, it at least looks like one. I can't see that getting past the brand team now.

These days, new Doctor Who gets broadcast round the world simultaneously. At the time, the news pages suggested that the television movie would be broadcast in the US in May, and then in the UK in the autumn. I remember enviously watching people online discuss their plans to fly to the States so they could watch the new episode. For me, buying the thing on video was going to be an extravagance.

Then the dates were fixed: the TV movie would premiere in the US on 14 May; it would be released on video in the UK the next morning and broadcast on 27 May. I read of shops that would open at midnight on the 15th so that fans could buy it straight away. The HMV in Preston was not one of them, so I went in the morning.

Preston town centre was a half-hour walk from my student house in Plungington. It was a typically grey, cold morning but I remember the itchy, shivery excitement as I made my way there. And the horrible, sinking feeling when there was no obvious display in the window. There was no obvious display inside the shop, either, and no sign of new Doctor Who in the new releases or sci-fi sections. I asked at the counter and they told me I'd got the date wrong.

I trudged to the computer room and found out what had happened. The BBFC had classified the television movie as certificate 15. The BBC chose to edit the offending scenes to get a more commercial 12 certificate, but that meant the video wouldn't be out for another week.

So, on the morning of Wednesday, 22 May I trudged back to HMV and at last picked up the video – there were posters in the window and a special cardbox display stand. I had lectures that morning, too, so couldn't watch it at once. And my friends Darren and Andy were interested enough to follow me back home. I think we watched it once in rapt silence and then again straight away.

I loved the TV movie. What surprised me, a week later when it was broadcast, was that so many other people tuned in, too. My then girlfriend's whole house delayed going out for the evening to watch it – and not out of any deference to me. My landlord rang later in the week about something, and asked if I'd seen it, again without knowing I was in any way a fan.

In fact, the only people I knew who didn't watch it were my parents, who managed five minutes before deciding it wasn't enough like the show they remembered. This I didn't learn for weeks: I think they were a bit sheepish anyway, but also it hadn't occurred to them that, being panel members of BARB, their switching off would affect the ratings.

My chum Joseph Lidster had a different experience:


"In May 1996 I was 18 and coming up to the end of the first year at university. I was a Doctor Who fan in that I bought the books and the magazine every month but it wasn't a huge part of my life. I didn't really know any other fans and, to be truthful, I was far too busy embracing student life (bottles of lager for A POUND!) to think about it a huge amount.

And a ticket! To some place called BAFTA? 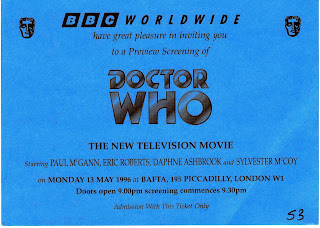 I couldn't believe it. It really didn't seem real. I'd only been to That London on school trips. It was miles from Carlisle where I was studying. And because I didn't have any friends who were into Doctor Who, and there was only one ticket anyway, it didn't seem feasible to think about going. I also had an exam the next day so I'd have to travel there and back in a day. So I wasn't going to go. Sensibly, I wasn't going to go. But that Doctor Who part of your brain isn't sensible. I had to go.

So I sorted it. I managed to scrape together enough money for the train and off I went. It's all a blur really. I remember loving the movie itself because it just seemed so modern. These days we take for granted Doctor Who being a modern thing but back then, even only seven years after the TV series had finished, it felt like a thing of the past. It looked like a thing of the past. And then I saw the TV movie and, yeah, it was bonkers and to this day I've no idea what happens at the end but then – and now – I still think it's absolutely brilliant. It's just simply so much fun. And that theme tune and title sequence on the big screen was really just amazing. I think I did whatever the 1996 version of squeeing was.

I can't remember much about my visit. I didn't really talk to anyone because I didn't know who they were. I spoke to Gary Gillatt (the actual editor of the actual Doctor Who Magazine!) afterwards and gave him some thoughts which he never used in the magazine. For which I have never forgiven him. I do remember some bloke in the audience asking me what I'd thought about it. He said he hadn't liked it so much because he'd thought the older Doctors were going to be in it. But, mostly, I just remember it being a mad brilliant night. Manic and a blur. Very much like the TV movie itself.

Oh, and I totally aced my exam the next day.

(Joe even appears briefly in this BBC news coverage of the premiere. And weirdly, Joe and I are both now on the DVD of the TV movie, wittering on about why we love it.)

But the thing that's most different from now is what happened next: the gradual realisation, month on month, that the pilot wouldn't be picked up, that the BBC had thrown money and publicity at the television movie and it hadn't worked... Doctor Who wouldn't be returning.

I love the date on the DWM letter.

I followed the exploits of Jean-Marc L'Officier's set visits to the TV Movie in the rec.arts.drwho newsgroup in the months leading up to 1996. From my dorm room, effectively in DOS.
Yesterday I watched McGann's triumphant return on my phone :)