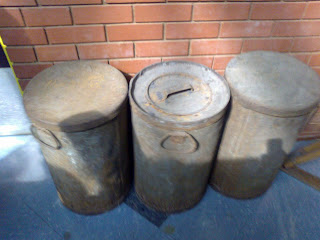 These are the old milk churns in which were found rolls and rolls of film of ordinary people larking about, shot by Mitchell and Kenyon a century ago. The churns stand to one side in the reception of the BFI archive at Berkhamsted, which opened its doors to a select clutch of visitors yesterday, including yours truly.

It's a treasure-trove of fascinating things. Next to the milk-churns was the blood-red costume worn by Ingrid Bergman as Paula in Gaslight (1944) - looking in good nick for its 70 years. Facing that was a costume worn by Greta Garbo. As we made our way round the building, we saw continuity photos from Star Wars, the Academy Award won by Cecil Beaton for Gigi, an invitation to Peter Sellers' first birthday and Derek Jarman's scrapbook from filming Jubilee.


Having nosed round and worked in a number of archives, and nattered to curators and experts in a variety of fields in a variety of pubs, what struck me more than the splendid artefacts was how well organised the tour was, with a good range of material covered and engaging people to talk to us. They answered our questions and kept to time, while sharing their expertise in a way I could understand. That is no mean feat.

As well as the special collections of props and paperwork, the tour covered the BFI's efforts to preserve old film and TV. We saw a two-inch tape machine, like the ones on which programmes such as Doctor Who were once recorded. The tapes, at £400 in the early 60s, cost more than the cast were paid for a week, so the tapes were reused and episodes were wiped... We saw the wet-gate process and how it vanishes the cracks and damage on old film. We even got to handle film strips and poke our noses round the vast stacks of film cans with alluring titles... 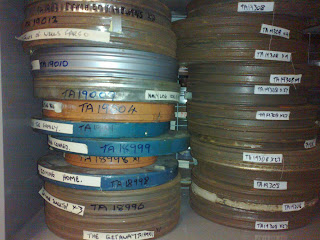 Most fascinating to me (chiefly because I already knew a fair bit about telly preservation) was the discussion of silver nitrate film stock. It's not just highly flammable; as it burns it creates oxygen so can't be put out. Our guide told us of a safety demonstration where burning film had been placed in a bucket of water and then, when it was removed, had reignited. The burning film also releases noxious gases such as cyanide.

So there's a reason there are so few Art Deco cinemas survive - they burned down. Now you need a specific licence to run silver nitrate film in a projector. The BFI have the two licences, and also the largest collection of nitrate films as most other archives have transferred their stock to safety film (which has its own problems with mould and vinegar syndrome) and destroyed the dangerous stuff. We got to nose round the chilly, concrete bunker where rooms of the dangerous nitrate are stored.

There are those who argue that silver nitrate is better than subsequent formats, though one of our guides suggested this was because it tended to be struck from the original negative, rather than being a later-generation copy. Nitrate also used to be cheap: its use was as much about cost as its quality.

It was a grand day out, and thanks to my chum K for letting me tag along after her. 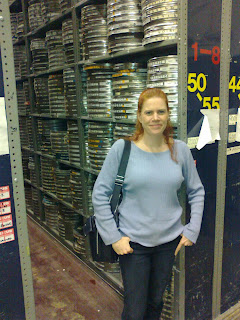