My next big thing

Paul Magrs started a thing of getting people to talk about their next big thing. Last week, Joseph Lidster did it and nominated me. So here is my response.

What is the title of your new book?
Instead of a book, Joe “Makes His Own Rules” Lidster talked about his episodes of Wizards Vs Aliens. So my next big thing is also not a book but the short film, The Plotters, which you can watch here:

Where did the idea come from for the book?
My brother Tom and I have been working together for a few years – him as a director, me as a writer / dogsbody. We made a series of documentaries for the old-skool Doctor Who DVDs, and then last year completed our first short film, Cleaning Up, a thriller starring Mark Gatiss and Louise Jameson.

Since then, Cleaning Up has been playing film festivals and getting us in to see agents and productions companies. At Shortcutz in April (where we won Best Film), Nik Powell – director of the National Film and Studio School – advised us that there was a demand for strong comedy films, and we were keen to show our range by doing something different.

We knew the deadline for the Virgin Media Shorts competition – to make a short, self-contained film of no more than 2 minutes 20 seconds – was coming up. But I also knew from experience that comedy is not necessarily my strongest area. So we looked around for help.

We’d already worked with comedy writer and producer Adrian Mackinder on another short, Revealing Diary, so took him out for drinks. Tom and I both suggested ideas for a comedy short, and then Adrian mentioned an idea he’d already been working on a while back with writer Hannah George, about Guy Fawkes and the Plotters. We thought it was brilliant, so – with Hannah’s kind permission – Adrian unearthed their script and we went from there…

What genre does your book fall under?
Historical comedy.

What actors would you choose to play the part of your characters in a movie rendition?
Adrian stars as Guy Fawkes. The rest of the cast was made up of good, comic actors Tom and I already knew: Barnaby Edwards and Nicholas Pegg (who I knew from Doctor Who things: they play Daleks on TV); Anthony Keetch and John Dorney (who I knew through production company Big Finish); my friend Will Howells who’s a rather good stand-up comic; and a number of fine fellows Tom knew. I also played a policeman at the end.

The first cut of the film was well over four minutes, with some amazing comic turns from the actors. They were brilliant. So it was agonising having to cut so much of that to fit the time.

What is the one sentence synopsis of your book?Remember, remember... who are you again?

Will your book be self-published or represented by an agency?
We posted the film to the Virgin Media Shorts competition website, and in September it was one of 13 films to make the shortlist – you can see all 13 at www.virginmediashorts.com. As a result, it’s now playing in more than 200 Picturehouse cinemas around the UK, in front of main features, as well as on Virgin OnDemand and Tivo. That’s all very exciting in itself, and then tomorrow (8 November) we find out which of the 13 films wins additional prizes.

Tom and I are not currently represented by an agency, though we’ve had some promising meetings with agents in the last few months.

How long did it take you to write the first draft of the manuscript?
Adrian provided me with his and Hannah’s original script on 24 May. My first notes followed that same day, and then we knocked it back and forth between me, Adrian and Tom. I provided them with a nearly-there draft on 2 June and we had a locked version on 9 June, although that was still titled “Five Eleven”. The next day, a friend pointed out that that joke had been done in an episode of Mongrels, so instead I, er, pinched the name of a Doctor Who book by my friend Gareth Roberts.

What other books would you compare this story to within your genre?
If I had no humility at all, I would say Monty Python, Blackadder or Horrible Histories.

Who or what inspired you to write this book?
Tom is a fierce and pitiless tyrant of a boss. We also had a limited budget and amount of time to make another short, so the competition deadline and Adrian and Hannah’s idea all fitted perfectly. There was about six weeks from deciding we were going to make the film to delivering it.

But the gag of the film is based on the famous picture of the plotters in the National Portrait Gallery’s collection:
What else about your book might pique the reader’s interest?
This handsome, behind-the-scenes picture: 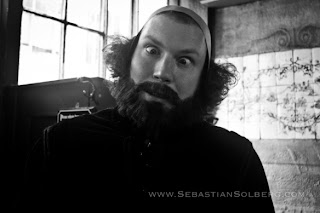 I now have to tag five writers to continue this thing and answer the same questions on Wednesday next week. They are: Ben Aaronovitch; Scott Andrews; Niall Boyce; Andrew Cartmel and Una McCormack.
Posted by 0tralala at 12:24 pm