The Masters of Luxor

The Dr has already blogged about our trip to Luxor in Egypt over new year. I've been writing what follows in fits and starts.

We stayed for a week and packed in as much as possible. Our hotel was a short walk from Luxor temple, the Luxor and mummification museums and a longer walk from Karnak – we arrived there at half eight in the morning and pretty much had the place to ourselves.

We hired a guide and driver to take us to the Valley of the Kings where we poked our noses in the tombs of Ramsees IX, III and IV (but sadly not Thutmoses III which is mentioned in the Doctor Who story Pyramids of Mars). We went to Deir al-Madina (the village of the workers who built the kings' tombs) and the Ramesseum – where we saw the vast, fallen statue that inspired Shelley's poem Ozymandias (which is more than Shelley did, as he based it on a visit to the British Museum). We got to see the Al-deir Al-bahari temple, the Valley of the Queens, Medinet Habu temple and took a cruise up the Nile to Dandara, where the Dr was delighted that opposite a rare carved portrait of Cleopatra and Caesareon is a temple (and the equivalent of two fingers) built on the orders of Caesar Augustus. Having admired the pale blue ceiling that showed an ancient zodiac, we spent the four-hour trip back down the river gazing up at the stars.

We also took a four-hour drive to Abydos, a vast, impressive place still with its original ceiling, where I snapped the following two short videos on my wireless phone:

We saw so much, the Dr took 400-odd photos and pages and pages of notes. The ancient building are covered all over, often with huge Pharaohs smiting people from different countries. Flinders Petrie collected casts of the people’s faces as part of his study of race – something the Dr is writing a book about. And while she gathered evidence, I was struck by how often we saw the same posture, one Pharaoh or other stood with feet apart, one arm raised and the other pointing out, while wearing a kilt with a hanging belt. Here are two examples: 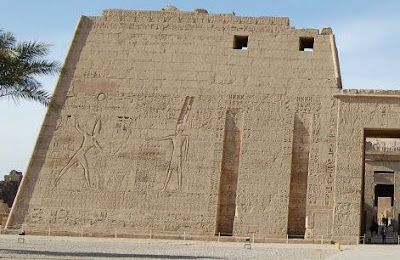 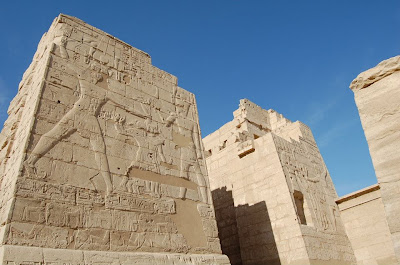 There were relatively few other tourists: the hotel was only 40% full and was a bit desperate in asking us to come to its gala new year's eve dinner. The local people were keen to tell us that Luxor is safe for tourists – horrified that the Arab Spring and ongoing events in Cairo might have scared people off.

Since so much of the economy is based on tourism, that's a real problem. We'd been warned before we went, but the constant hassle was a bit of a shock at first and then a wearying nuisance. Wherever we stepped, people hurried over to offer taxis, boats or horse-drawn rides – some of the horses barely skin and bone. They wanted to know where we came from, where we were staying, where we were walking to. They wished us happy new year or called out “Lucky man” and “Why not smile?” – and if they got any hint of an answer they'd then offer us taxis, boats or horse-drawn rides. If they couldn't get a reaction from me they'd run round to the Dr. “Madam”, they'd say, and the try exactly the same tack.

One man followed us down the road telling us which hotel we were staying in and for how long – the creepiest sales pitch ever. Another promised us “no hassle” and then continued the pitching in a whisper as if we weren't meant to hear.

In every temple and museum there seemed to be someone keen to point out something in plain sight or to offer to take us past roped-off sections, if we’d only pay out some small change. At the airport, the man loading our bags through the scanner expected something. The guide books advised us to keep a separate pocket of this grubby baksheesh.

It was exhausting at first, but within a couple of days we'd developed thick skins. Sadly, some people did just want to say happy new year – but even saying thank you to them brought more people hurrying over. I managed to offend a man working in a bar by blanking his polite inquiries about where we were from. I apologised, said I'd thought he would only try to sell us something. And without missing a beat he pointed over to his stall of souvenirs and invited us to browse. There’d be something for free if we did. We finished our drinks and escaped.

The worst part was if you did actually want to buy something. You couldn't browse – the people in shops would flap around beside you making suggestions, or trying to put items in your hand. We tried to buy a bottle of water and the man in the shop kept repeating, “Only one?” and then offering to drive us to a place out of town where we could buy souvenirs at a bargain price. Trying to buy a guidebook, we were surrounded by people offering advice, eager to fetch us the same books in French or Italian, a constant, desperate witter that just made us want to give up and walk away. This hustling sometimes just confused us, so we bought more than you wanted or paid a silly price.

“It’s a different culture,” explained the tour rep, before offering to sell us day-trips. We had to buy them from her then and there, and soon found other guests who’d turned her down only to buy much cheaper tickets for the same trips just by asking at reception. Ho hum.

But it is a different culture, one where sharing wealth is a sign of virtue. We have our own strange ways. In crowded London, giving people space (such as by not talking on the Tube) is a mark of respect – though that’s not how it often appears to people visiting the city. But also, baksheesh isn’t so foreign an idea. Watching old films since I’ve been home – The Hound of the Baskervilles from 1939, Doctor No from 1962 – I’ve been struck by the number of times Holmes and Bond hand out money to people who offer them help. Those they patronise seem grateful, and it’s used to show our heroes’ impeccable manners.

Once the Dr met up with a local archaeologist and he organised a driver to take us round, the bothering changed gear. There were still people eager to sell us souvenirs, but they didn’t trail after or crowd us. And it was oddly reassuring to see Egyptian tourists visiting from Cairo treated exactly as we were. (The Dr was thrilled by the numbers of Egyptian tourists visiting their own heritage sites – she thinks it bodes well for the future.)

Generally everyone we met – even the people trying to flog us vastly inflated old tat – were welcoming and friendly. We went to a brilliant new year’s eve party on the roof of a hostel where there was live music and a dancing girl, though (having been shoved forward by the Dr) I felt too awkward and sober to dance with her for very long.

We'd planned to mix the sightseeing with days by the pool, but there was so much we wanted to see that we didn't exactly stop. Most days we were up with or before the sun, having breakfast as the hot air balloons rose slowly over the Valley of the Kings. When we weren't touring, I wrote pages of spec script and read Claire Tomalin's biography of Dickens - which I might blog about if there's ever a spare moment. But don't expect much: Egypt was my last break for some time...

Luxor is really very great and historic place to visit.You have really nice information,thanks for your interest.

Going to Colombia in October was somewhat like this, though worse on the coast than Bogota (where one merely had to be alert).