Will scrawl for food

Not dead, just busy with all manner of efforts to be gainfully employed. Freelancing involves a lot of pitching and begging and poking of feet into doors, but in the last few months my hit rate has been down.

Got plenty of work on, and am working every spare moment, but not all of it's very highly paid. Then there's the projects which get cancelled when I'm already well into them, or the fun discussions after delivery where it turns out the bosses can't pay all that they said.

This sort of thing has gone on since I went freelance back in 2002, but it seems to be happening a lot more in the Current Climate. There seem to be far more people gunning for the jobs, and that can even mean the applications process is all much more complicated so as to ward some of these people off.

But a desperate Tweet earlier this week has paid off rather nicely, and I've spent a busy few days pitching stuff every which way. Got some meetings and things coming up, too, so it's all looking a bit more hopeful.

In the meantime, I had a lovely afternoon at the NFT on Saturday, with Bernard Cribbins on fine form as he entertained a packed cinema mostly full of geeks. I think I must have known half the people there, and got to say "Wotcher" to most of them. Also chastely admired a pretty lady two rows in front, before realising it was Channel 4 News' Samira Ahmed.

On Sunday, the Dr dragged me from the typing to go see Sherlock Holmes. Must admit I dragged my feet a bit - I've avoided Guy Ritchie since Revolver [my review of which has vanished from the Internet; I shall look into that]. But it's a smart, exciting and funny film, packed with glorious details, from the works of Conan-Doyle himself and Victoriana. The House of Lords is too wide, and an insider would spot that it's got the wrong walls and ceiling. And Tower Bridge was built in 1894, so some years after Holmes' fateful adventure with the chap with chalk on his lapel. But that's me desperately trying to find fault with the thing. Go see; it's really good.

Oh, and the church down the road is now extolling that Jedward is a lot like the story of Jesus: 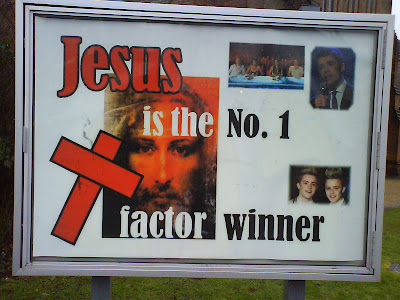 I know I said this last time you posted about the church down the road -- and I say this is as someone who considers myself fairly Christian (without much use for most churches) -- but there's something so wonderful to me about people promoting their Christianity in weird, problematic and/or just plain hilarious ways on the other side the ocean. I'm not sure why it's comforting to know it's a universal, rather than American, thing, but it is.

*looks around* It feels like ages since I've commended here.

Anyway - I saw that church poster a couple of weeks ago. Is it possible for a church's own output to be religiously distasteful? A rather glib bit of crucifix action, I thought.

*looks around again* I think you forgot to hoover that spot.

Commented, even. Certainly not commended. :P