Had an appointment at that hot-bed of terrorism University College London this afternoon. Got taken for lunch in the Senior Common Room - by someone both senior and common - and admired the paintings. 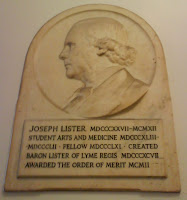 As we left, I noticed this plaque in honour of a local celebrity, but can only assume it was researched on Wikipedia. Where is the mention of "The Rapture", or those four episodes of Sarah Jane's Adventures?

Thence with Nimbos to the Wellcome Collection for a nose round their free Identity show, which runs until 6 April. In eight rooms - with doors which are hiding - we learn of nine lives that illuminate what makes us who we are.

There were plenty of top facts and things to ruminate on. One caption explained that the publishers of the first version of Pepys' diary (Latham and Matthews, 1983),

"took advice on whether they were likely to be prosecuted under the 1959 Obscene Publications Act by printing for the first time Pepy's reference to his wife's menstruation."

Pepys' contemporary Robert Hooke, meanwhile, kept a diary from 1672-80 that was limited to "terse observations of fact" - though he did helpfully use a "Pisces" symbol to mark days on which he ejaculated. On the wall behind these extracts played diary extracts from Big Brother.

The exhibition deftly mixes up the lives as lived by people, and the pioneers and theorists transforming how we (think we) live our lives. There's the impact of IVF has on a family of twins, and people who've campaigned and had surgery to change the gender-labels affixed at birth.

I was also impressed by the room shared by Sirs Francis Galton (inventor of eugenics and the fingerprint) and Alec Jeffreys (pioneer of DNA profiling), and the wealth of detail about phrenologist Franz Joseph Gall - including how much he was mocked in his own time.

A set of stairs also leads up to the permanent exhibition on Wellcome himself, packed with the odd things he collected. I loved the caption on Hiram-Maxim's Pipe of Peace:

"Hiram Maxim (1840-1916) invented the machine gun and also a patent inhaler (his Pipe of Peace), which he devised to treat his bouts of bronchitis. His friends worried that this invention could damage his reputation. As he said: "It is a very creditable thing to invent a killing machine, and nothing less than a disgrace to invent an apparatus to prevent human suffering."

I'll have to go see that exhibition. Sounds good.