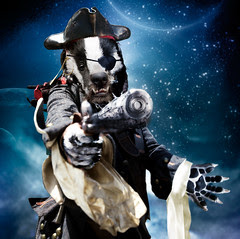 Went to Manchester yesterday to sign more copies of Dr Who and the Pirate Loop. It was more exclusive an event than maybe we'd expected, but congratulations to young fans Peter and James for winning the quiz. Me, Jim and Trev did readings of our best bits (Milky-Pink City; the Doctor walks into the bar; the Doctor in the bathroom) and then got to scrawling our names.

John Davies of Short Trips fame made it along, and I also got to meet Mike Amberry and Bernard O'Toole, who'll be in "How the Doctor changed my life" later this year. Both manfully resisted the urge to throttle me for the work I've made them do. Then it was on to beer and Chinese, and a contest for lame meets with celebrities.

My brother-in-law and his mate the Yemayan Ambassador (see page 91) worried we'd share the last train home with Manchester's finest drunks. Sadly, the trip back to Macclesfield was quiet and uneventful.

Amongst the Decemberists, there was much comparison of our various reviews and how can readers pick up or concentrate on the strangest of elements.

Anyway. Hooray, because I've managed to come out pick of the month of all knock-off product featured in this month's DWM, and am a bit dazzled to beat The Target Book, let alone my colleagues.

"The Pirate Loop is one of those rare things, a children's book that adults will adore. It's clever, funny, thoughtful and silly, and loads of other good words. But the one that sums it up best is this: brilliant."

SFX likes Jim's one best (though refers to it as "Peacekeeper"), and thought mine worth just 2.5 stars out of five. My own, it says, starts outrageously,

"and gets gradually camper from there ... It lurches between comic setpieces and frequent bursts of violence (including endless shootings and a couple of gratuitous stabbings), while the constant pressing of the temporal reset button quickly becomes wearying (even Martha admits she's "getting a bit bored by it all" at one point). It's also incredibly talky, and everyone knows that, if there's one thing guaranteed to turn the kids off, it's too much yakking." 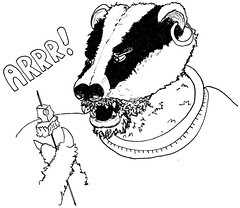 In fact, my book seems to have caused a bit of a stir, with some people tickled pick and others rather angry. "Omega's Chicken" on the Doctor Who forum thread for the book (you have to register to read it) seems especially cross, calling it "Absolutely terrible ... just childish, dull and banal." But on the whole people who deserve to continue to living (joke!) seem to enjoy it.

I don't think I can really count Millennium's lovely comments, much as they made me beam.

A few people at signings (some of them adults) have also asked about What Archie Did Next. Even the folks at my publishers seem taken with the little scamp - my editor even had cake with Lee Binding's Archie artwork printed on it. And I'm told people have done drawings...

But can you do better? I've set up an open Flickr group, "Archibald the space-pirate badger", in which YOU can submit your own drawings.
Posted by 0tralala at 6:10 pm

About the flickr group... i have yet to read the book but as to drawing badgers I'll be right on it!