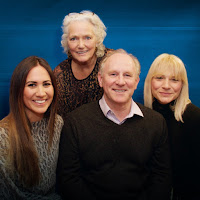 Out in November, Wicked Sisters is a trilogy of Doctor Who stories in which the Fifth Doctor and Leela must destroy two powerful beings who threaten all of space and time. Their names are Abby and Zara...

It's been a thrill to reunite the Doctor with the leads from my sci-fi series Graceless, and I couldn't be happier with the result. The series stars Peter Davison, Louise Jameson, Ciara Janson and Laura Doddington - plus some amazing guest actors who will be announced in due course.


The Fifth Doctor (Peter Davison) is on course for a reunion with some old friends when he crosses paths with sisters Abby and Zara.
Created by pan-dimensional beings the Grace to assist – and sometimes hinder – the Doctor in Big Finish’s Key 2 Time trilogy, Abby (Ciara Janson) and Zara (Laura Doddington) went on to their own time-spanning adventures in the acclaimed spin-off series, Graceless. After centuries of their own wanderings through time and space, Abby and Zara are about to meet the Time Lord again...
Doctor Who: The Fifth Doctor Adventures – Wicked Sisters is now available for pre-order, from just £16.99, and is due for release in November 2020.
The Doctor is recruited by Leela for a vital mission on behalf of the Time Lords. Together, they must track down and destroy two god-like beings whose extraordinary powers now threaten all of space and time. Their names are Abby and Zara...
This new full-cast Doctor Who audio drama box set features three linked adventures by Graceless’ creator and writer, Simon Guerrier, who wrote the very first appearance of Abby and Zara in Doctor Who: The Judgment of Iskaar.
Producer Mark Wright said: “It’s been ten years since we first took Abby and Zara off on their own adventures, and it’s fun to get the team that’s worked on every episode of Graceless together every couple of years.
“Simon Guerrier’s scripts always take us into unexpected territory, and Ciara Janson and Laura Doddington bring something new to their performances each time Abby and Zara are back together. As it’s been a decade since the first series of Graceless, we thought it was time to bring things full circle and take the sisters back to where it all began – with the Fifth Doctor.”
Writer Simon Guerrier added: “It’s been a thrill to write for the Fifth Doctor and Leela, and put them up against Abby and Zara. You don’t need to know anything about Graceless - that was part of the brief from my masters - but they’re sisters with extraordinary powers that threaten all of time and space.”
“They’re very different from the women the Doctor first met all those years ago when we did the Key 2 Time series. Back then, he wasn't required to kill them...
“The three days we had in studio just before Christmas were the highlight of my working year. A dream cast, a lot of laughter, and Lisa Bowerman ably marshalling everyone as we faced the collapse of the universe.”
Doctor Who: The Fifth Doctor Adventures – Wicked Sisters is now available for pre-order, exclusively at the Big Finish website from just £16.99.
Posted by 0tralala at 5:14 pm