Space school today was on identifying constellations, and I've drawn spidery diagrams of such things as Boote, Canis Major and the the big and little bears.

Since I was at the Royal Observatory, I also took advantage of the sunshine to snap some pics of William Herschel's 40-foot telescope, which I mentioned in my recent post on the origins of the Big Bang theory. 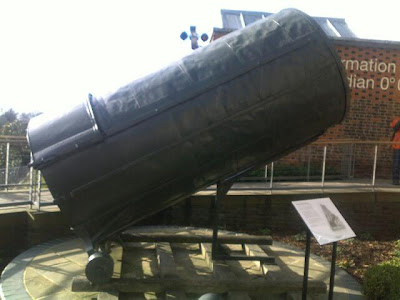 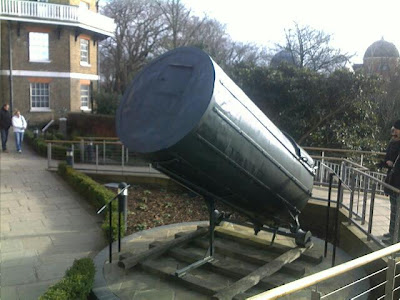 The caption in front of the telescope says:

"This is the remaining section of a 40-foot (12m) reflecting telescope, built for the astronomer William Herschel, who became famous for his discovery of the planet Uranus in 1781.

The telescope was the largest in the world and cost over £4000, paid for by King George III. Completed in 1789 and erected at Herschel's home near Slough, about 30 miles (45km) west of Greenwich, it soon became a tourist attraction. Some people likened it to the Colossus of Rhodes, and it was even marked on the 1830 Ordnance Survey map of the area.

Sadly, the Herschels did not use the great telescope for much serious astronomy since it was difficult to set up and maintain. William's son had it dismantled in 1840. Most of the tube was destroyed when a tree fell on it 30 years later.

You can find out more about William Herschel's work in the Weller Astronomy Galleries in the Astronomy Centre on this site."

Last year, I also posted about another telescope in London, the Monument.
Posted by 0tralala at 2:14 pm

Too bad they didn't get much use out of it.

According to NOVA, Herschel not only discovered Uranus, but he was the first to see the Milky Way. He and his sister studied it intensely.

Take a look at "Hunting the Edge of Space." http://www.pbs.org/wgbh/nova/space/hunting-edge-space-1.html

". . . behind all Herschel's discoveries, including that of the planet Uranus, stood his sister and collaborator Caroline."

Note wonder why there is the Herschel Space Observatory.

Herschel's discoveries and exploits centuries ago still excite and motive new astronomers. If he could achieve so much with his telescopes what's stopping us amateurs ?