The Dr and I have been a bit overwhelmed by the response to that last post. The comments on the blog, on Facebook and privately are really appreciated, and make me wish I'd said something months back. Thanks everyone. A few people even asked if they could pass on what I wrote. Yes of course, if you think it's helpful - the direct link is:

What with that response, it's been a good week all told. On Wednesday night I made my radio and broadcast debut* with a thing on topical sketch show Newsjack (episode 2.5). For those listening on iPlayer for the next few days, my sketch is about 25 minutes in and involves Mrs Thatcher.

(* I was a talking head on a documentary about Flash Gordon, but this is the first thing I've written that someone else has wanted to buy.)

I've been sending Newsjack sketches every week since the series began last month, and I'm delighted the one that got through is a fart joke set in 1979. You might also like to watch the original footage it is based on, which - with the mix of cheers and jeering - is remarkable in itself.

Having been pitching and pitching for weeks, another couple of things look like they're happening, and a third is suddenly moving. Can't speak of them now, but after a very tough January life is feeling a bit better. 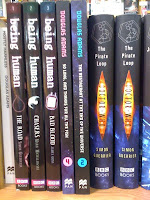 My Being Human novel "The Road" is beginning to appear - including in the WH Smiths at Victoria, whence this picture was taken. I am thrilled to be jostling beside the works of Douglas Adams, though I don't quite understand understand why I'm there.

Reviews are also starting to appear. I'm delighted by this one, which spots that I nicked the title from Kneale and not Cormac McCarthy:

"Guerrier piles on the atmosphere, reminding me very much of Sapphire And Steel or the great Nigel Kneale in the way he describes our connections to places and landscapes and where times past are having a direct effect on contemporary events such as the building of a new road, and he creates quite a morally complex character with Gemma, carefully building up our sympathies for her only to twist them darkly out of shape towards the end of the book. An engrossing mystery written in a brittle prose that conjures up the swirling emotions of loss and revenge eating away at broken human lives that test the enduring spirits of our three 'heroes."

Hooray! Paul Simpson, meanwhile, gives me and James Goss 7/10 each, and Mark Michalowski 8/10:

"All three authors get the voices of the main characters right ... maintaining the show's combination of pathos, drama and black comedy ... They don't shy away from the horror element intrinsic to the show, although it's notable that we don't see George on a vulpine rampage – probably because the second season has been at pains to show George and Nina going through their monthly cycle as part of the ongoing Professor Jaggat plotline. (There is a brief reference to Jaggat, although there's no sign of either the professor or the bible-spouting Kemp, in line with the BBC policy that nothing important can happen in tie-in books.)"

That last bit is a little unfair. I'd feel a bit cheated if important parts of a TV show were only to be found in some tie-in books. Mark, James and I created our own characters and situations which I hope are engaging in themselves and add something to the experience of the series as a whole. You might as well get at us for not having written the books in 3D.

You can also win copies of the Being Human books in the latest, Being Human-tastic issue of Gay Times.
Posted by 0tralala at 3:13 pm

Ahhhh Newsjack. I've been encouraged to send sketches in but to be honest I don't think I'd have the right kind of tone. I'm delighted you'll be on--I'll make a point of looking it up on iPlayer.

The song goes, "It's a long December, and there's reason to believe / maybe this year will be better than the last." Substitute "January" for "December" and I think it summarizes many of us this time around!