Have spent most of the last week sheltering indoors, stuffing myself full of food and booze. J. and J. put on a splendid spread for Christmas and we watched The End of Time Part One on their ENORMOUS television. Otherwise, we've been at home, the Dr slaving in the kitchen while I have wrought what must be writ.

Amongst the house-guests, the Baldrick-in-law and his Bird were here the last two nights, and today I escaped the current OpenOffice document for a day in the cold and rain.

We bussed to Lewisham and got to sit in the very front seats of the DLR to Greenwich - a quite special treat. There's not a lot to see of the Cutty Sark at the moment - it's all boxed away - but the signs said it would be back and better than ever in 2010. Which is the day after tomorrow.

We followed the river a bit, which even at full, slopping tide seemed less wet than we were. Then we slunk through the Water Gate and nosed round the Old Royal Naval College. 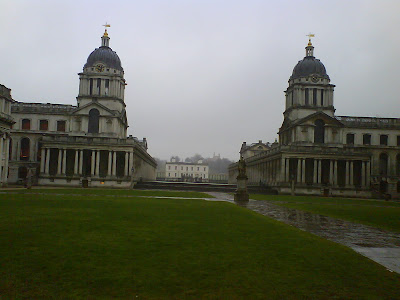 There's a gap in the two wings of the Hospital so as not to spoil the view of the river from the Queen's House (where me and the Dr got married and the Doctor told Leela that the Rani had two time-brains). You can also just see in the picture above the Royal Observatory up on the hill, where I did various bits of work this year - and from whence I took a similarly drizzly grey photo looking back the other way in May.

We had a nose round the Chapel (in the left-hand wing of the College, through a door nestling behind those nice columns) and the Painted Chamber (in the right). The Dr pointed out that the bit of road running just in front of the columns is used in all sorts of costume dramas.

Having dazzled our visitors with this High Culture, we ambled to the pub. The Trafalgar was full of smart people enjoying a Private Event, so we snuck down the alley to the Yacht, for a pint or two of Doom and a Big Ben Burger. 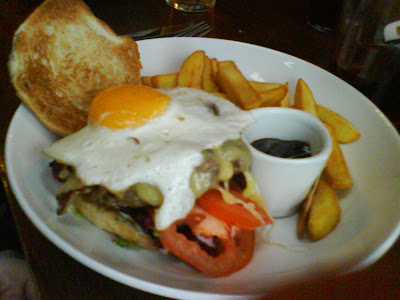 Yes, that's a good hunk of a BURGER plus BACON and CHEESE and TOMATO and SALAD and an EGG. Hardly even touched the sides. 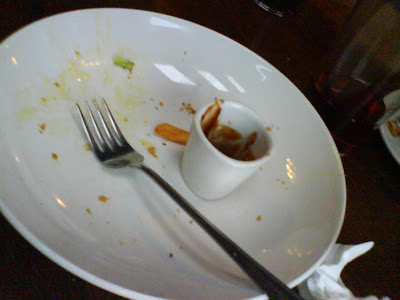 After we'd filled our faces, we queued in the rain for a Clipper to Waterloo, gazing through the steaming windows at the grey-shrouded landmarks passing by. And then home.
Posted by 0tralala at 5:47 pm

The DLR is tremendous fun until you actually have to rely on it. The relationship soon sours!

I used to get the DLR everyday, back in the days of Canary Wharf only having one tower. It was fun watching the seasoned and surly commuters still trying to get the front seats.

Wow, that burger! I'll make the boyfriend take me there, I'm sure he could manage the burger.