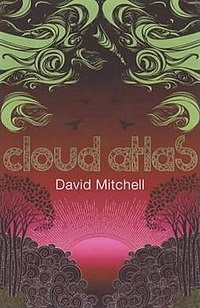 I’ve made a start on the great stalagmite of books assigned as “quite like to read”. David Mitchell’s Cloud Atlas was one I picked up for the train back from Sheffield, having heard so many fine things about it – winner of a Richard and Judy award, shortlisted for the Booker and blogged about by Phil.

It held me captivated from start to finish, the straightforward prose style drawing you into a complex and enigmatic epic that well deserves its praise. I’m still trying to puzzle it all out…

As my well-informed readers will know (though I didn’t ‘till I started to read it), the book tells six distinct stories, set over several hundred years. Each story stars an archetypal character, and though each of these reminded me of other books I’d read, Mitchell’s ability to give them distinct voices and to turn their lives upside down makes for thrilling reading.

Story A is told by Adam Ewing, an American scholar exploring the Chatham Islands in the early nineteenth century. In some respects, this reminded me of Matthew Kneale’s English Passengers – with the naïve narrator similarly giving the reader more insight to his voyage than he himself comprehends. It also covers similar ground about native populations being wiped out.

Ewing’s exploration includes him stumbling through the roof of some kind of primitive shrine. My immediate thought, having seen from the book’s blurb that we’d be visiting the future, was that this was some alien spaceship… But Ewing vows to keep the place secret so that his shipmates don’t exploit the discovery. And as he sets out again to sea with them, he’s suddenly taken sick. And then –

We’re left hanging in the middle of a sentence.

Story B begins some hundred years later, and thousands of miles to the west. Robert Frobisher writes to his friend (and lover) Sixsmith about his adventures in Belgium. Frobisher has been cast out by his wealthy father and is making his own roguish way – just ahead of a wake of unpaid bills and scandals. He’s a very different character to Ewing, with a voice so distinct that it makes for striking contrast.

Mitchell himself acknowledges that “certain scenes in Robert Frobisher’s letters owe debts of inspiration to Delius: As I Knew Him by Eric Fenby (Icon Books, 1966; originally G Bell & Sons, 1936).” We follow Frobisher as he ingratiates himself with an elderly, syphilitic composer, bedding the man’s wife at the same time as helping him finish a number of late compositions.

What links Frobisher to Ewing is not immediately clear – there’s no apparent plot, theme or structure to link them. They could not be any more different. But as Frobisher scours his host’s exemplary library for items he might sell, he stumbles across the first half of Ewing’s story, the half that we’ve just read.

(The only insight we get from this is Frobisher pointing out what we’ve only begun to suspect: that Ewing’s “sickness” is an attempted murder.)

Story C is a “shocker” in short bursts of chapters, the book’s only third-person account. Luisa Rey is the daughter of a famous war correspondent, struggling to follow in his footsteps. She’s chasing a story about the local nuclear plant and an internal report damning its safety. And in doing so, she meets an old scientist called Sixsmith – forty years after Robert Frobisher wrote to him.

Again, it’s a very different story to what has gone before, told in a distinct and fast-paced style. It mentions Watergate itself, but the all-pervading moral decay reminded me much more of Chinatown (a seventies film for all it’s a period piece).

Luisa Rey isn’t just linked to the previous story because she reads Sixsmith’s letters. She’s also got the same comet-shaped birthmark, and it’s strongly suggested that she might have been Frobisher in a previous life. The Guardian review suggests that the six characters in the book are all reincarnations of the same person (a trick done previously in Kim Stanley Robsinson’s The Years of Rice and Salt).

But that’s not the case; indeed the next protagonist pooh-poohs the idea. Only Luisa and Frobisher are explicitly linked this way, which adds a haunting aspect to the pot-boiling thriller. The third person telling also means we can leave the first part of Luisa’s story on a particularly nail-biting cliff…

Story D is set in the present day, with the flamboyant Timothy Cavendish reaping the whirlwind that follows his publishing the memoirs of a London gangster. Cavendish is an acerbic story-teller, and his tale features some great and unexpected twists. The observant scorn of contemporary mores – as well as the way it keeps pulling the rug out from under us – is a little reminiscent of Alexei Sayle, but that is no bad thing. To speak more would spoil its surprises.

Story E is told by Sonmi~451, a clone bred to work in a fast-food franchise in not-too-future Korea. The battery existence Sonmi has only ever known is punctured by a sudden epiphany, and we learn she’s been intellectually augmented as part of a revolutionary experiment. A pawn in the cruel games of this society’s elite, her story is at once a thriller, a satire of rampant consumerism and of Communism, and a play on Soylent Green.

The middle story is the only one not split in two. Zachry’s spelling, punctuation and post-apocalyptic world reminded me of Russell Hoban’s Ridley Walker. At first it seems the sophisticated visitor come to review Zachry’s island is just studying comparative savages. As the story continues we get hints of how much has changed since Sonmi’s time. I only realised towards the end we were in the same group of islands that Ewing explored in Story A. By Zachry’s time, the white settlers who wiped out the savages are living no less enlightened lives…

After Zachry, we go back to each of the five previous narrators for closure, each in turn. Knowing the future, and having had hints of the endings to come (Cavendish, for example, concludes Story D2 by spoiling the end of C2), adds an extra suspense to this second half. But it becomes clear that the links between the stories are not so obvious as reincarnation or some other great plot revelation.

Frobisher is, for example, no longer just an engaging rapscallion – his adventures also have something to say about the nature and value of our existence.

“People are obscenities. Would rather be music than be a mass of tubes squeezing semi-solids around itself for a few decades before becoming so dribblesome it’ll no longer function.”

Since the book’s chronological “story” (as distinct from the structure by which it is told) starts and ends in the same group of islands, it seems this is a history of the rise and fall of enlightenment, as understood by the west. There’s a case for the conquerors having become the conquered, of the world of technology and genetic engineering hanged with a rope of its own making.

But it is Ewing’s final thoughts as he finishes his journey that bind the myriad happenings and themes. Without giving too much away about any of the stories, his conclusion is that we – as individuals, as a species – can only reap what we first ourselves sow.

There are other things (some listed on the book’s Wikipedia entry): the difference a peaceable individual can make; they way we are remembered. These people are so vividly alive in their own stories, and long-dead in everyone else’s.

Most of all, these individual lives are all engaging enough reading. But taken together, they are transcendent.
Posted by 0tralala at 1:33 pm

Silly me, I thought it was a nonfiction book about clouds.

> the six characters in the book are all reincarnations of the same person (a trick done previously in Kim Stanley Robsinson’s The Years of Rice and Salt).

Not to mention Yukio Mishima's Sea of Fertility.

It's not exactly the same islands in "Sloosha's Crossing" as in "The Pacific Journal" -- F is Hawaii, whereas A is the Chathams. They'er about as far apart from one another as Pacific islands get.

That said, it's quite clearly a thematic return. (And Adam may set out from Hawaii, now I come to think about it. It's been a while since I read the book.)

What did you make of the suggestion that some of the stories are fictional rather than historical in relation to one another? (The Luisa Rey story being a novel manuscript Cavendish reads, for example.) Come to that, Cavendish is old enough in the 2000s that he couldn't possibly be a reincarnation of the 1970s Luisa, unless souls travel in time to reincarnate.

(My own interpretation of this is that Cavendish is the only "real" character, and the rest exist in a fictional continuum where reincarnation happens. But I'm not terribly secure on the point.)

Sadly, where you have a stalagmite, I have Olympus Mons.