You would make a good Dalek

Up early Saturday to get the train to Manchester. Read the first quarter of Nobody’s Children (first draft), which is really rather good. Hooray!

Met the brother-in-law and his mate P., and caught the free bus into town. Some kids on the bus were off to the same top destination, and compared signed merchandise on the way. One explained seriously to his friend that,

“Nick Briggs is funny, and not as scary as you’d think.”

Texted this at the boss himself, who’s glad it’s not the other way round. 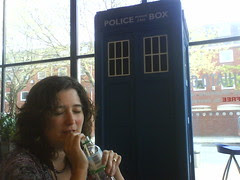 The Museum of Science and Industry’s Droo exhibition was absolutely packed, and we had three quarters of an hour before our timed tickets let us in. We sat in a café and ate Bellinis, and I snapped the Dr in front of the TARDIS.

Eventually got into the show, the only grown-ups not escorting children (or using them as an excuse). Proved my geek credentials by not only identifying each of the first eight Doctors, but also which stories their pictures were from. P. very impressed. Or maybe a little scared.

That was the only concession to old-skool show, and we wended our way round the displays of new show monsters and costumes. Was more entertained by the other punters, and kids barely able to toddle explaining to their grans where the Moxx of Balhoon fitted in.

Bottlenecks around the Cybermen and Daleks, of course, and other adults seemed to think me brave for having my picture taken right by the sink plunger. The shop was full of new-logo toys – tents and screwdrivers and action figures I’d never have dared dream of when small.

There were a few knock-off products without the new series logo, which looked a bit shabby in comparison. No Big Finish of any flavour – a terrible and tragic oversight.

We wandered a bit round the MSIM’s other, free buildings and then found ourselves a pint. Then a bus to the shops, on which the Dr got chatted up by an incomprehensible drunk. (No, not me.)

On the trek back to Piccadilly, the bro-in-law led us into an inauspicious bookshop to see a display of toy soldiers. There were three tiers of marching Nazis, hand-painted in Hong Kong and £20 a piece. As well as Hitler, Goebbels and anonymous troops and youths, there were limited editions of Heydrich, Hess and other middle-ranking Nazi slebs.

We were struggling to find words when the bloke behind the counter came over to help. The figures, he said, were illegal in some countries, but weren’t half as offensive as stuff in some of his books.

Bryan Ferry had a point, he went on, and anyway, some people collect and dress up in SS uniforms. That was nothing political, of course – the clothes were just stylish and well made. He was short, enthusiastic (at least towards the Dr, who didn’t tower above him) and we weren’t sure if he was joking…

Caught the train back to Macclesfield. The teenage girls sat opposite were overheard to say that I was “pretty fit”, which says a lot about the talent in this poor part of the world. The Dr was still finding this hilarious a good hour later – a bit unfair given the best she can do is drunks and neo-Nazis.

Beer and splendid, scary Droo, then out to snaffle curry. Talked new series theories and old continuity with P. into the small hours. Late up yesterday, good pub lunch and then the long trip home.

Is this similar to the one they have in Cardiff? It sounds like it.