This old body of mine is wearing a bit thin

63. INT. SCHOOL ENTRANCE – DAY
MICKEY shakes off the broken glass and climbs out of the car. SPECCY KID laughs as MICKEY trips over K9, and falls flat on his face.

MICKEY: How did you get out the car, then?

K9: I was not wearing a seat-belt, Master. I fell out of the back.

MICKEY: Right. There’s a lesson there, you ram-raiding youngsters.

K9: Please replace my side panel. My parts are showing.

So Dr Who grows up. All right, I cried. Twice. And couldn’t get the stuff about age and death and having to let go out of my head all night.

It’s funny, lots of people have said the bat-people plot was secondary to the stuff about companions, but I think they worked deftly hand-in-hand. The monsters offer Dr Who all he longs for, the chance of saving his friends. That’s why they’re scary.

More importantly, while the you-can’t-hold-back-death stuff is bothering to us wearing-out grown ups who remember Sarah from the first time round (or, at least, from the Five Drs Who and some novels), there’s plenty to freak out the children.

The stuff that used to scare me about Dr Who was not the stuff on screen but what my head then did with it. That’s how nightmares work – they’re a sign of your imagination engaging with the consequences.

Mawdryn Undead terrified (don’t laugh) because Dr Who had regenerated alone and by accident, and was sick and covered in blood in the TARDIS. My hero had been smacked down by something vicious and random, and no one had been there to help him. 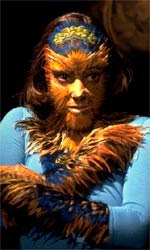 In Vengeance on Varos, the Dr rescues Peri from being turned into a squawky bird, and though the (dodgy) make-up wears off, she’s still squawky bird in her head. He hadn’t saved her, and he didn’t even noticed she was still a monster.

(Years later, I got to tell Nabil Shaban he’d given me terrible nightmares. He considered this, and then just said, “Good.”)

School Reunion had archetypal stuff with benevolent teachers being evil and the monsters amid the familiar. (Very familiar if you know Rusty’s a big fan of Buffy: blowing up the school, a Scooby gang, vampires, the loneliness of immortality, and nasty Ripper…)

More than that, though, there’s the kid left out from what everyone else is doing, locked outside the classroom and locked inside the school. He’s the one who doesn’t understand the lessons everyone else finds so easy, and the one who glimpses a monster that no one else will believe.

Stuff to lodge into your head then, whether it’s the speccy kid, Rose or Sarah you identify with. Which is a bit bloody clever, I thought.

But isn’t Speccy Kid going to be in big trouble for blowing up his own school? A speccy kid with an ASBO and a hoodie and…

>Mawdryn Undead terrified (don’t laugh) because Dr Who had regenerated alone and by accident, and was sick and covered in blood in the TARDIS. My hero had been smacked down by something vicious and random, and no one had been there to help him.<

Mawdryn Undead was the most exciting story of my youth. Again because of the ideas... the ones as above (although we see Davison running about in parallel to those scenes we're still not sure if this person is somehow also the Doctor and then once we are sure it's not him, we wonder what will happen next...)

But also because of the idea that they were all in the same place but not at the same time, and all the Brigadier related shenanigans that leads to...

And there's the idea that there ae as many of Mawdryn's people as there are Doctors left... fans seem to get worked up that its all Time Lord stuff but to me as 10yr old it didn't come across as boring old backstory but as something that would clearly change the Doctor forever and that mattered.

And there was scary Turlough...

I hearted Mawdryn Undead at the time and still do. I might watch it tonight. Why isn't it out on DVD yet?