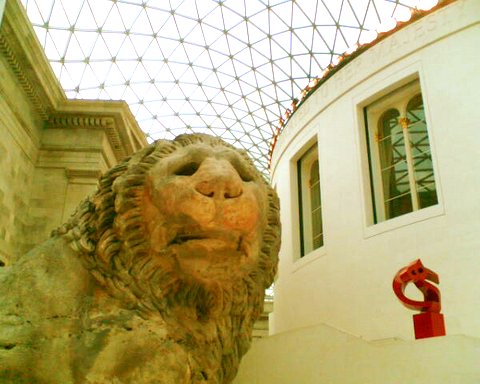 Went to the exhibition of Michelangelo’s sketches at the British Museum (until 25 June) which was really rather busy. In between getting shoved and stepped on by the myriad other punters, saw some really fascinating stuff.

Even the most dashed-off outline shows a world of technical skill. The bloke was just 21 when he carved the Pieta I’d been so impressed with in Rome. Git.

Interesting to see different constructions and arrangements for familiar pieces. The sketches are useful because they give an insight into technique – and there’s a pretty fab computer wossname showing how the sketches make up the Sistine Ceiling.

His work is based on very close observation of models, though he’s happy to take liberties for artistic effect. The exhibition points out that Adam in the Sistine Ceiling (and the South Bank Show title sequence) couldn’t really lounge like that without breaking his pelvis. And the iconic David’s hands are too big.

I think it was my A-level art teacher who said this was ‘cos Mike was showing off he could do hands. Some chums who can’t catch say it could mean something else.

The Dr and her chums got giggly about the apple-like lumps that did not look like real boobies. This was not an artist taken to scrutinising nude ladies – a sharp contrast from the feminine curves in the Picasso Museum just over a week ago. No, the women look like men with bits stuck onto them. (But see also my expert analysis of the contemporary Tintoretto).

The implicit sexuality is referred to in the exhibition, but I felt they’d played down the salacious detail so as not to damage the master’s reputation. There’s a short notice which effectively says, “It wasn’t really gayness. It was sort of expected at the time to shaft young boys.”

Across the entrance hall, the Warren Cup offers an insight into “Sex and society in Ancient Greece and Rome”, and the Dr was busy taking notes. I know exhibitions are meant to be neutral, dispassionate and objective, but I felt something was lost in this abstraction. The exhibits are cold and long-dead, though they’re insights into people’s busy, passionate and mucky lives.

(Note the picture of the cup on the website is tastefully positioned so you can’t see any boys shagging.)

Went to a rather good party on Saturday night and was sat at the front for Dr Who. Bloody hell, that was a bit exciting. Other’s have already spoken of the Firefly influence (which even the Dr spotted, bless her), and my first question to those in the know was, “Go on then, is it Sutekh?”

They told me, God damn them. But you’ll have to wait and see.