The boat from the airport took longer than the flight, allowing for some initial impressions. The first delight was the sunshine. From a distance, the Venetian skyline with its towers and domes reminded the Dr of Istanbul (a city with many links to Venice, as John Julius Norwich’s history of the place explains in detail). 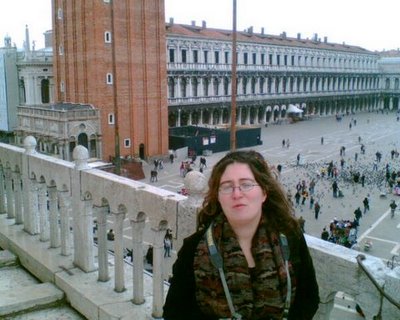 Venice is a lot like the Dr herself – very pretty, packed full of history, quite goth out of season, and on the costly side. Yes, I shared this observation with her, and yes, I survived. Eventually the boat dropped us just by our pad, La Calcina, where Camberwell’s John Ruskin put up in the 1870s while updating his book on local stones.

We found a little place for breakfast, then walked into St Mark’s square. The sunshine prevailed, lifting our wintry spirits, and the perfect blue sky picked out the green of the water and the pale pink and white of the buildings. You’re suddenly able to understand what all those paintings you’ve seen of the place are trying to capture.

We stopped to admire things on the way, like the baroque splendour of the church of Santa Maria Zobegnigo (or Santa Maria del Giglio as it called itself – the churches seem to have numerous names, which makes finding them in the guidebook lots of fun).

Sculptures of the patronising Barberos are resplendent on the front, with the same silly hats, beards and cloaks as Guy Fawkes. It’s odd to see such “hip” fashions on the outside of a church; because of the Reformation, the most contemporary catwalking you tend to see in English church stonemasonry is medieval and, at a push, early-modern.

Much less impressed by San Moise, in an ugly little square with its own ugly hotel. Venice is elegant but a bit gone-to-seed, the shabby tat and graffiti adding to its appeal. But this little square was something else, and stuck out like a sore thumb of concrete.

And so we reached St Mark’s square, more full of pigeons than people. Odd to see seed being sold; London’s long realised the damage done by winged vermin. We admired the outside of the Basilica – which reminded herself of pictures of Moscow, and me of the Brighton Pavilion. We opted to get the Dr’s homework done first, and scurried round the piazzetta admiring the bits of statue the Venetians had nicked from antiquity before that kind of thing got all trendy.

Pushing through the clots of tourist who – as everywhere else – stop to gape and take pictures wherever streets bottleneck, we took a detour into the Museo Diocesano where an exhibition caught my eye. It began with several rooms of pretty unremarkable religious efforts, gloomy and none-too-well observed.

Then we emerged on to Tintoretto’s sequence of huge canvases, a vast comic-strip biography of St Catherine. The Dr was captivated, admitting she knew little about the artist (a surprise, since he’s a favourite of her beloved David Bowie, whose tunes are published under the name Jones (his real surname) Tintoretto).

The series mixes quick, blurred impressionism and moments of fine detail to create a strong sense of movement and physicality. I commented that in the scenes where St Catherine gets shockingly but rather tastefully disrobed, her tits look all wrong. We decided that Tint was probably not allowed to see his model’s naughty bits – so limbs and hips are womanly, but torso and norks are a man’s.

Next we got a boat across to the Isola di San Giorgio Maggiore, which affords a picturesque view back across to St Mark’s, but little else. There was an advert being filmed for some breed of car, which I assume was being archly ironic. Venice is incredibly quiet and chilled out being car-less. 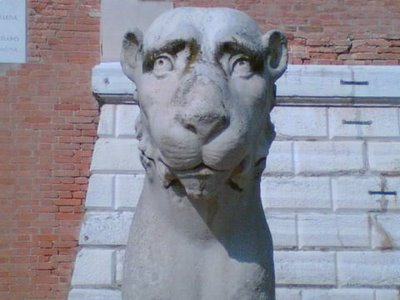 We popped back across the water to the Arsenale, the most beautiful military base I’ve ever seen. The Dr was delighted to catch up with the vast stone lions the Venetians had half-inched from the then newly-exploded Acropolis. I liked the sorry-looking maneless one best, but the other (as Ruskin noted) is very like that from Knidos, now languishing in the British Museum’s Great Court.

This was our reason for coming, so lots of pics got taken as soon as the gaggle of overly dressed and middle-aged ladies had buggered off out the way. There’s a lot of fur coatage in Italy, which to my untrained eye looked stitched together from small, brown creatures, the tall, narrow patches creating – I assume – a slimming effect. Again, like Venice, it’s elegant and rather tatty at the same time.

The Scuola Dalmata di S. Giorgio degli Schiavoni was closed until 3, but our wanders found a bar where the bloke – in English barely better than our guidebook Italian – explained that it was his compleannos, and we were welcome to a beer though really they'd closed. Which was all very pleasant, if sitting down made us realise how tired we were.

The Scuola itself had a fun St George, defeating a dragon amid a wasteland of bits of other bodies. Which was pretty grisly and cool. The Dr remarked on how much is lost seeing holy decorations like this in a museum or gallery; they’re much more impressive and powerful stacked up against one another in the dark and god-terrified ambiance of a church.

Then the boat back to the hotel for a much-needed siesta, before stepping out for dinner. I had the steak. It was good.

Next morning, we were at the Basilica for 10am, a beautiful place mixing Byzantine and more western traditions, picked out in black and gold. I’ve never really been that wowed by gold, though, and was less impressed by the pay-to-view gold plate behind the altar than the exquisitely carved marble columns nearby. 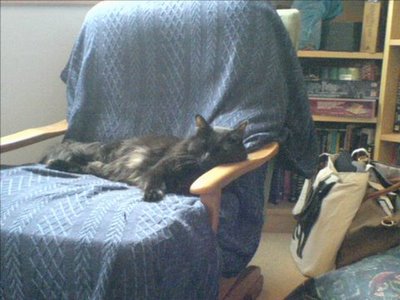 Also enjoyed the museum upstairs, which my mum had recommended just for the horses. We took some pictures on the balcony to text to our friends, and in reply got a picture of the cat not missing us in the slightest.

Then, shivery with cold, we headed on to the Chiesa di Friari and Scuola Grande di San Rocco, with the Rialto Bridge along the way. The day was greyish, but warm whenever the sun peeped out. Deb was wowed by much more Tintoretto, though again his women all sport man-boobs.

After returning to the hotel for lunch, we ventured out for another explore and found a pizzeria where the service was pretty atrocious. And we think the jug of water may have come out of a tap…

We made a hasty exit, and found a nice little bar off a side-street, where we made friends with a six-week-old puppy comprised mostly of Labrador and bounce. I regret to say that this might have been the highlight of the holiday.

Some hours later, and rather full of wine, we stumbled back to our digs in time for my bottom to fall off. Spent a not very happy night feeling like some villain was squishing my intestines. Have since discovered there’s a noble tradition of Venetian Tummy. Ick.

The Dr left me to sleep the next morning, and nipped away to see the fun things in the Acaddemia. We then caught the boat down the Grand Canale to the train station, marvelling at the pretty buildings along the way. We had a while to wait for the train itself, so we sat reading on the steps in the sunshine, letting the world turn around us.

Despite the blissful setting, and the kind attentions of herself, I was feeling pretty raw. So this bit appealed especially:

“Columbus’s three ships, returning to Spain from the Caribbean in 1493, had brought with them the first cases of syphilis known to the Old World; through the agency of the Spanish mercenaries sent by Ferdinand and Isabella to support [Neapolitan] King Alfonso against the French invasion, the disease had rapidly passed on to Naples, where it was rife by the time Charles [VIII of France] arrived. After three months of dolce far niente, his men must in turn have been thoroughly infected, and all the available evidence suggests that it was they who were responsible for introducing it north of the Alps. Certainly it had reached France, Germany and Switzerland by 1495 and Holland and England by 1496; by 1497 not even Aberdeen had been spared. In that year Vasco da Gama rounded the Cape of Good Hope and reached India, where the disease is recorded in 1498; seven years later it was in the Canton.”

Next episode: The Slave Traders.