Chewing gum for the soul

A five-hour trip down to Rome from Venice, where I mostly sat opposite a doting, snogging couple sharing one seat. Which didn't help the limited legroom.

Took time off from Norwich on Venice to zip through the fun Colosseum book the Dr had bought me, co-written by one of her PhD examiners. It's very good on the way the Colosseum has been used over the centuries - as propaganda for one group or other. Despite the best efforts of the church to claim otherwise, for example, there's no evidence that Christians were ever fed to lions there. Also:

"In the sixteenth century, Benvenuto Cellini, the brilliant Florentine jeweller (even if appalling self-promoter and thug), went to the Colosseum on at least two occasions by night in the company of a Sicilian priest (and part-time necromancer) in order to use the black arts to recapture his girlfriend. On the second occasion this proved a rather too successful experiment in summoning the spirits and the necromancers terrified the wits out of themselves. As Cellini explains in his Autobiography, no fumigations seemed effective in persuading the demons to leave - until one of the party in panic 'let fly such a volley from his breech' as John Addington Symonds' delicate translation puts it ('gave such a blast of a fart accompanied by a vast quantity of shit' is closer to the demotic Italian) that the evil spirits took to flight."

The train called at Florence, with a tantalising glimpse of Brunelleschi's tower. Golly, wish we'd had room in the schedule to see more. Next time, next time...

Arrived in Rome early evening, and was immediately assailed by the noise. It's a dirty, smelly, autophile capital, no worse than my beloved, curmudgeonly London, but still a shock after the tranquil Rialto.

We dumped our bags in our dismal hotel room and went to explore. The Dr found the quite backstreet where Charles Newton had stayed about 150 years ago. Then we got a bit lost making our way to the Spanish steps - the Roman equivalent of the 7-11 for bored teenagers to hang around listlessly. And then we found a restuarant on the way home where I ate all of a huge Calzoni. Mmm.

Not getting up as early as we'd meant to, we reached the Colosseum by 10 the next morning, having stopped for a peak in the Santa Maria Maggiore on the way. The Colosseum is very cool, but close up it becomes obvious just how much it's been rebuilt and mucked about with over the centuries.

The queue to get inside would have eaten up too much of our one day in the city, so we admired the place from outside, and the Dr took pictures of tourists taking pictures of the gladiators.

We then made our way up the Via Sacra to the Forum, hanging a left to go see what was left of the Circus Maximus. It's not quite all it was when they filmed Ben Hur. We sat and watched the joggers and dog-walkers still using the ancient site.

Next we headed to the Tiber and followed it round into the Jewish quarter. There's an ancient theatre and more ancient stuff round the back of the synagogue, ruins side-by-side with memorials to those taken off to concentration camps in 1943.

Then, on the Ponte Sisto while admiring the great wolf murals decorating the Vatican side of the river, the Dr bumped into one of her colleagues - a freelancer, running a school trip. Last time she was in Rome, 10 years ago, the Dr had bumped into a group from her old school in the Colosseum. I suspect bumping into her learned chums in the world's hellenic-period sites is going to become a more and more regular occurence.

We followed the river up to the Castel Sant' Angelo - a castle that's star-shaped on the maps and round on the horizon. Then we doubled back onto the Via della Conciliazione and up to St Peter's. The Dr, crowing about my Catholic past, was insistent I see inside.

Dear Christ. The HQ of the most theatrical religion in the world is a strangely unmoving and clinical place. The twisted, black canopy over the altar is just nasty, but otherwise the vast marble cladding and statuary left me cold. Obviously the clattering prattle of the tourists didn't help, but there just wasn't any empathy or spiritualism in sight.

The one exception was Michelangelo's Pieta, a genuinely heart-breaking vision of a mother distraught at the death of her son. It speaks to emotions we all relate to - love, death, our's mums and the awfulness life can deal us. I tried, distracted by the epileptic flashing of cameras all round, to see what I'd been taught at school - that Mary is a good third bigger than her son, which is how Michelangelo can have Jesus sprawled across her lap like he's on some great, comfy sofa. It's a hell of a nifty trick; it just seems so right, so natural, so universal.

But that was the exception. Rather than speaking to the people in the congregation about their own lives, as the other various churches we'd seen did, this was all about the cult of dead popes.

St Peter's is a church not to God, his son, or his people, but to a line of uncharasmatic old men in funny hats. Popes, you know, aren't the most exciting bunch - the more pedigree royal's are more fun.

Then again, we didn't have to queue to get into St Peter's - the great snake of pilgrims was there to see the tomb of Jean-Paul 2. So we must be wrong, I guess. Popes are cool. We bought a pope calendar and pope magnet in the gift-shop.

Then on to the Piazza Navona, where they're all out having tea in Fellini's Roma. Wasn't too bothered by the Pantheon, whose 17th century roof looked like it had been built in the '30s, and by one of those boring fascisti. The Santa Maria Sopra Minerva was much more beautiful, the darkness and quiet, the sense of intimacy and mystery, exactly what the last two churches had lacked. It felt less like it was saying, "Do as you're told" as "You are welcome here".

Our Rome guide recommended us some eats round the corner, the tiny Enoteca Corsi on the Via del Gesu, which you'd miss if you weren't looking specifically for it. "Very cheap, and a real taste of old Rome," said the book. And exactly right.

Then to the Trevi fountain, which lacked the feeling of the film by being jam-packed with tourists - especially, for some reason, those with huge rucksacks. We tried to work out where Charlie Newton's father-in-law had had rooms, and think we identified the right street.

Then, as evening fell headlong into the night, we trekked back to the hotel up La Nazionale, for beer and (really very unpleasant) take-out. The taxi came for us at half four, and we were back at Stansted by 8.

But our adventures were not yet over, as there were no trains through Penge East because of a fire. We had to go round and down and about, and then walk the half-hour back, already foot-sore from the previous day's touristing, and under the weight of all our luggage.

But home, eventually, where M had made us breakfast (as well as preparing Dr Who's sandwiches all week), and then sleep. Marvellous sleep. 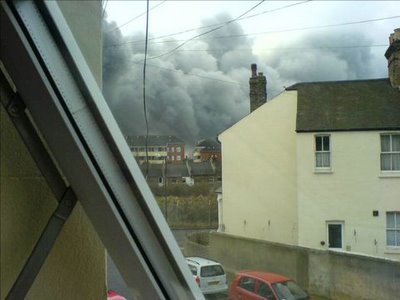 Turned out that a carpet warehouse down the road had caught fire. They were still putting it out in the evening, when we went to see if the local pub we'd found on our detour proved to be any cop.

M's picture, right, is from out our living room window, earlier in the morning. Foom!

Nice trip - I'm sure I'll see the full photo-set in the fullness of time.
I had no-idea about the carpet warehouse - no news or even sight of smoke this end. I bet the smell was, um, interesting.

what was the Penge pub? And was it any good? I've never found a good one there yet.

what was the Penge pub?
Er... I have forgotten what it's called, but it's about five minutes' from us. And yeah, it was nicest one we've found yet. Will have to show you.