17 years of new Doctor Who

17 years ago today, on 26 March 2005, Doctor Who returned to TV after an absence of almost as long. That first new episode Rose is still fresh and exhilarating, and readily available on iPlayer. It's easy to imagine someone starting with it now and quickly getting hooked.

But I wonder how Rose would look to someone coming to it only familiar with Doctor Who from Jodie Whittaker's Doctor. Would it seem so very different? In the intervening years, there have been new lead actors, the move to high definition TV, and there's a lot more CGI - but in its pace and feel and imagination, and in the character and motivations of the Doctor, it's still recognisably the same programme.

How that contrasts with the first time Doctor Who turned 17, on 23 November 1980. The night before that birthday, State of Decay Part One saw the Fourth Doctor and his companions - two aliens and a robot - meeting vampires in a bubble universe, in a clash of old mythology and cutting edge physics. A few weeks before, on 4 November, is was announced that Peter Davison would be taking over the title role in the series, a markedly younger actor than the previous incumbents, promising new life for the then-venerable series. And a little before that, on 25 October, the first episode of Full Circle made a big impression on me; it's the earliest thing I remember.

For a long time, to me Doctor Who before then was essentially myth. My elder siblings shared tantalising memories of Doctor Who stories from just a few years before that I thought I'd never see. Old Doctor Who had been better, scarier, stranger - and theirs. Then came fleeting glimpses of what had been. At the end of 1981, BBC Two repeated some old stories, including ones older than my siblings. I vividly remember the awe with which we met Doctor Who's very first four episodes, relics of another age.

For one thing, they were so strikingly different from the Doctor Who of 17 or 18 years later. They were black and white, but also dark and spooky and shot in a completely different way: long scenes with lots of close-ups, and little in the way of effects. There was also the character of the Doctor, this grumpy, cowardly, selfish figure - literally a different person, not just played by a different actor.

This extraordinary difference was evident to the people who worked on the programme. Jacqueline Hill, who played Barbara Wright in the first 18 months of Doctor Who, returned to the series in 1980 to play Lexa, an alien priestess. If Billie Piper, who played Rose, were to return to Doctor Who now, I wonder how much she'd share these sentiments:

"We did Meglos in different studios, and of course television had moved on in leaps and bounds so that the technique was completely different. The special effects were a lot more dominant. It was recorded entirely out of order and there was nobody working on the story who could remember as far back as me – which was something of a humbling experience. I did enjoy it very much, though, mainly because the part I played was so very different to the calm and unflappable Barbara. It was a happy reunion with a show that was really only the same show by name alone." (Jaqueline Hill in Doctor Who Magazine #105 (1985)

As it happens, this week I was in London to research more about the early days of Doctor Who and the people who made it - stuff now on the cusp of living memory. Since I was passing that way, I called in at a particular tree. 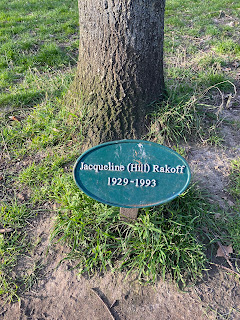