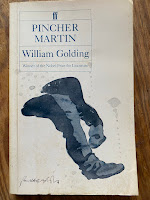 It took a while to get into this 1956 novel by William Golding, and after the first few pages of a man struggling in water mixed up with bits of other stuff - conversations, images of life - I turned to the back cover hoping the blurb might provide a steer on what was going on. What's there contains a whopping spoiler for the end of the novel, and so does what follows here...

The back of this Faber paperback offers no teaser or summary of plot: instead, there are two quotations from reviews praising the "technical wizardry" (Kenneth Tynan in the Observer) and "sustained imaginative intensity" (unknown in the TLS). Tynan's particular praise is for, "the shock ending, which throws a new and doubly alarming retrospective light on the whole book". Rather than illuminate what's happening in the book, the message is to persevere. Which is a little ironic.

Pressing on through page after page, things became more clear. Christopher Hadley "Pincher" Martin has been shipwrecked, his ship torpedoed in what seems to be the Second World War. Martin kicks off his seaboots and struggles through the water to a rough, sheer bit of rock, stunned and exhausted, while bits of his former life flash before his eyes. There's then the promise of a harder, grittier Robinson Crusoe: the rock offering little comfort or useful materials, and Martin already half-mad.

The glimpses of his life don't make us like him very much: a not very good actor, whose management were going to let go anyway before his call-up; a wannabe writer who has not written anything; a philanderer who once assaulted a woman who spurned him (an event, I gather, based on something Golding really did). Then there's the suggestion that the shipwreck was all his fault for giving the wrong order. There's a sense these privations - exposure, starvation, constipation, hideous sickness - are a punishment. Towards the end, there's a figure on the rock with Martin, suggesting this is some kind of purgatory.

And then the twist, as Martin's body is found on the shore and - in the killer final line - can't have suffered much because,

Everything that precedes this is the last desperate vision of a drowning, dying man. Those boots, which surely killed him, are even on the cover of my edition, the only part of Martin visible, in a deceptively simple design by Paul Hogarth. Even on the last page I thought I must be missing something, and yet in that final line, what had been unfixed and uncertain all locks into place.