One of Doctor Who's most striking images is the result of the production team trying to save money.

As Susan explains in the second ever episode, the TARDIS can normally change its shape to blend in invisibly where and whenever it lands. The show's co-creator Sydney Newman had, brilliantly, insisted that the Ship should at first look like a police box – a familiar, everyday sight at the time. But the police box prop was expensive so, in what was meant to be a temporary measure to spread the cost across more episodes, the TARDIS was stuck as a police box.

Hence the series' very first cliffhanger: an ordinary, everyday object, familiar to everyone watching, but on a stark and alien landscape. 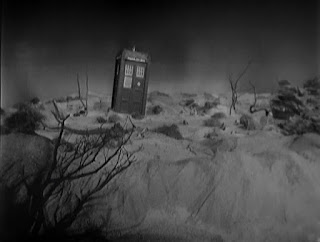 It's such an effective, eerie juxtaposition – the ordinary with the strange - that the show's used it ever since. Everyday objects come suddenly to life, famous landmarks serve alien armies, snowmen come horribly to life...

It also helps that this first cliffhanger is so well earned, using a neat mix of the ordinary and strange to sell us the idea of the TARDIS. The episode teases us right from the start that something odd is going on. There's the spooky theme music and opening titles, and then a policeman wandering through eerie fog. And we're shown something he doesn't see – an ordinary police box making a weird noise.

Even then, there's nothing to suggest the kind of strangeness to come. The first half of the episode is played very real. An ordinary pair of school teachers in an ordinary school discuss one of their pupils whose homework has recently got worse. Barbara is frightened as she and Ian follow Susan home, 'as if we're about to interfere in something that is best left alone,' but Ian is more pragmatic – Susan might just be meeting a boy.

The tension mounts as the two teachers explore the junk yard, director Waris Hussein picking out the unsettling, mangled face of a mannequin. Then we meet the Doctor – a suspicious old cove who asks lots of questions but answers none. The horrible suggestion is that he's locked Susan in the police box. The way it's been played, this "mundane" explanation - a story they might have done on Z-Cars - seems far more likely than what we're about to find out.

But all this ordinariness is setting up the episode's great revelation. Ian and Barbara shove their way past the Doctor and into the impossible, bright TARDIS. The darkness, the fog, the ordinariness of everything up to this point, help make it all the more striking.

Again, ordinary things are used to explain the strangeness. The Doctor likens the TARDIS to the way television works, and Ian's disbelief to a Red Indian's first sight of a steam train (Westerns were a lot more familiar in 1963). Ian's reaction, struggling to understand the incredible space, helps sell the idea to us, too.

The ordinariness of Ian and Barbara also presents the threat – they'll tell the police about the Doctor and Susan, or they'll at least tell their friends. Ian and Barbara want to escape from the strangeness. Susan wants to go with them, back to her ordinary life, but the Doctor decides there can be no going back, and spirits them all away...

As the TARDIS takes off, we again see the strange pattern of lights that made up the title sequence. By recognising it, by realising what it is, we're buying into the whole concept. The strange has just become familiar – and we believe that a thing that looks like a police box standing in a junk yard can move anywhere in time and space.

All of this is set up extremely simply. There are just four speaking parts – our leads – and just eight other people are named in the credits (plus the BBC's Visual Effects Department and Radiophonic Workshop). Telling the story through Ian and Barbara, keeping it close and immediate, really helps sell the idea.

But there's another master stroke in the cliffhanger: a shadow moves into frame. It's not just that the police box stands in a strange and alien landscape, but that someone is outside, waiting... 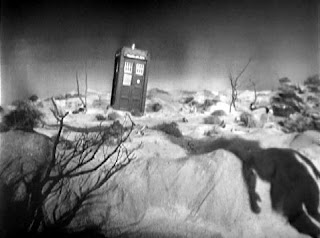