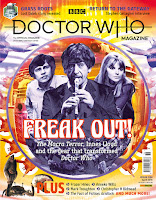 The new issue of Doctor Who Magazine reveals a lost Dalek story from 1966 - in my feature on how Eric Laithwaite, professor of heavy electrical engineering at Imperial College, was nearly Doctor Who's first scientific advisor. I had a lovely time working with Dr Rupert Cole at the Science Museum to uncover the story.

The magazine also includes word of my latest effort for Big Finish, part of The Early Years box-set to be released in November:


"[In] The Home Front by Simon Guerrier, the Second Doctor and Jamie McCrimmon (both played by Frazer Hines) will reunite with Polly (Anneke Wills) and Ben Jackson (Elliot Chapman) to face off against the Master (played by James Dreyfus)."

ETA: In fact, it's called The Home Guard and there's a blurb up on the Big Finish site.
Posted by 0tralala at 5:02 pm