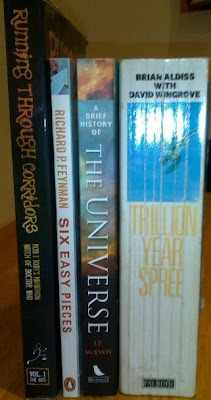 I enthused about volume one of Running Through Corridors by my chums Robert Shearman and Toby Hadoke the other day.

One thing I didn’t mention is that, like a lot of small-press publications it’s got a fair few typos. That’s less a criticism as an acknowledgment that my own work has been blessed with some extremely accomplished editors. Developments in publishing in recent decades mean that books are produced by an every smaller team of people. That has a whole load of benefits to the industry, but it also means they are checked by ever fewer eyes. Good subs are therefore worth more than ever.

Good sub questions like ‘Who is this aimed at?’ kept bothering me as I read through my next two books. Richard P Feynman's Six Easy Pieces is not quite what it says on the cover. The word “easy” suggests it might be entry-level stuff, physics for the plebs. But even with all my recent reading and study, a lot of it went over my head. It's certainly not as layman-friendly as Feynman's Fun to Imagine series at the BBC Archive, which was what prompted me to pick up the book.

It’s taken from a longer collection of lectures on physics, which Feynman delivered back in the early 1960s. And the thing that sticks in my mind is that these lectures weren’t exactly a roaring success:

"Through the distant veil of memory, many students and faculty attending the lectures have said that having two years of physics with Feynman was the experience of a lifetime. But that's not how it seemed at the time. Many of the students dreaded the class, and as the course wore on, attendance by the registered students started dropping alarmingly. But at the same time, more and more faculty and graduate students started attending. The room stayed full, and Feynman may never have known he was losing some of his intended audience. But even in Feynman's view his pedagogical endeavor did not succeed. He wrote in the 1963 preface to the Lectures: 'I don't think I did very well by the students' ... Even when he thought he was explaining things lucidly to freshman or sophomores, it was not really they who were able to benefit most from what he was doing. It was his peers - scientists, physicists, and professors - who would be the main beneficiaries..."
David L Goodstein and Gerry Neugbauer, 'Special Preface (from Lectures on Physics) in Richard P Feynman, Six Easy Pieces, pp. xx-xxi.

Despite failing his intended audience, Goodstein and Neugauer speak of Feynman's "magnificent achievement" and continue in the very next sentence that,

"Feynman was more than a great teacher..."
Ibid.

He might have been all very clever, but this jobbing freelancer muttered at that last statement.

JP McEvoy’s A Brief History of the Universe (in the same series as Jonathan Clement's book on the Vikings) is a more pleb-friendly volume, taking us through the discoveries and developments in science since ancient times.

The history of discovery is a good way for explaining science to lay people as it makes it about people and drama. Bronowski’s The Ascent of Man does the same thing very effectively.

And yet McEvoy’s book is very oddly ordered. He’ll use technical terms such as the ecliptic several times before explaining what they mean, and discusses both Kepler and Newton’s three laws in some depth before listing what they are. A good few times, a late explanation had me flipping back a few pages to read a whole section again.

At first I thought this was down to the author not knowing quite what level of knowledge to assume from the reader. But there’s also a lot of odd repetition through the book. On page 228, McEvoy tells us that,

"Hubble changed our view of the universe more than any astronomer since Galileo",

and a page later makes the same point:

"[Hubble] changed man's view of the universe as much as Copernicus and Galileo".

The Whirlpool Galaxy is another example: it’s first mentioned on page 150:

"Rosse was the first to see the spiral structure of what was later known as the Whirlpool Galaxy."

"[Messier's Catalogue of Nubulae and Star Clusters] was useful to Rosse who listed several of the nebulae on Messier's list, including M51, also known as the Whirlpool Galaxy."

Two pages later, there's a mention of the,

"famous Whirlpool Galaxy (classified by Messier as M51), one of the most conspicuous, and best known spiral galaxies in the sky. M51 was of one Charles Messier's original discoveries in 1773 and was sketched by Lord Rosse in 1845."

It's not merely the three mentions in as many pages that's so clumsy, but that the detail is in the last one: we could have just had that to begin with. (A later reference on page 237 wisely reminds us of Messier and his classification system when referring to the M51.)

This sort of thing shouldn’t matter but it's distracting. It's also indicative of a tendency to jump back and forth through the subject which can make it difficult to follow. That’s a shame because the subject is thrilling and McEvoy’s prose style usually simple and vivid.

And then on to made-up science. Brian W Aldiss and David Wingrove’s Trillion Year Spree, is a comprehensive history of science fiction published in the mid 1980s (and a follow-up to an earlier volume). The authors argue that sf is a sub-genre of the gothic and began with Mary Shelley's Frankenstein. They trace the highs and lows of the form through the next nearly two centuries, mostly focusing on US and UK work.

As a leading figure in sf himself, Aldiss is able to provide plenty of insights and gossip. Opinions of authors are often as much about what they were like in person as analyses of their work. There are a few fun jokes and bits of wordplay – one author is described as “more syndicated than sinning” – and quite a lot of bad ones.

There's an odd habit of paragraphs that only last one sentence.

But there’s not a great deal of depth, I felt. Rather the authors provide an annotated reading list of the “good stuff”. It’s telling, then, that Doctor Who gets one mention in passing while Star Trek's television series gets 6 entries and its four movies separately. A modern history of sf – especially one with such a British focus – wouldn’t do that now. And last year, Aldiss made his Doctor Who writing debut with a short story for the Brilliant Book. There’s a small schoolboy part of me that still can’t quite believe how much things have transformed.

There are other signs of the period in which this was written – such as that Iain Banks will be writing an explicitly sf novel next – but my main impression on reading titbits of the many authors’ lives is how little had changed. As Aldiss and Wingrove say themselves,

"It's evident, then as now, that the authors most eager to write for the quick buck are the ones most easily exploited by publishers."
Brian W Aldiss and David Wingrove, Trillion Year Spree, p. 168.

And, so perfectly put, the “rules of labour” in writing splendid hokum remain entirely unchanged: