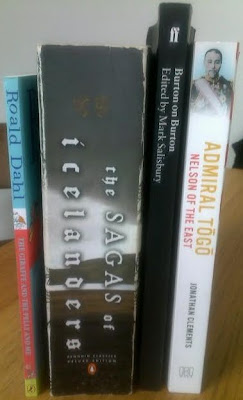 The Giraffe and the Pelly and Me isn't exactly one of Roald Dahl's best, and confusingly the "Me" of the title is not the small boy who narrates the story. It's a fun enough story about an all-animal window-cleaning service helping a small boy to fulfill his dream of running a sweet-shop, but it's not nearly as funny or thrilling as Dahl's other stuff.

The Sagas of the Icelanders is a fantastic best-of, produced alongside a sumptuous translation of the whole damn lot of histories set between about 800 and 1100 AD and written down a couple of hundred years later. It's reveals a fascinating, rich and bonkers world, full of richly drawn characters and eye-popping events, and deserves a post all of it's own. I realise that, on past form, that means I'll never get round to it. But I mean to.

Burton on Burton is a series of interviews with the director from his early work as a scribbler for Disney up to his (then forthcoming) Ed Wood. Burton tends to shrug his shoulders in response to the questions - his influences, his methods, his love of people wearing stripes. He's amiable enough but there's no great insight into his brain. The book is also from a time when Burton's career was generally in the ascendant, and I wonder if his perspectives have changed as a result of some projects not entirely wooing an audience. A nice enough but not exactly essential read.

I attended the launch for Admiral Togo, written by my chum Jonathan Clements. It's a fascinating account of the man who commanded the fleet in the Russo-Japanese War of 1904-5 which was so integral to my History A-level and was, until the Japanese sided with the Nazis, a celebrity all round the world. Clements is good on conflicting sources and context, and has a nice eye for detail and the absurd. For example:

"Barbed wire had been employed against cattle for several decades, but it was at Port Arthur [in the siege in 1904] that it was first recorded in a military application."