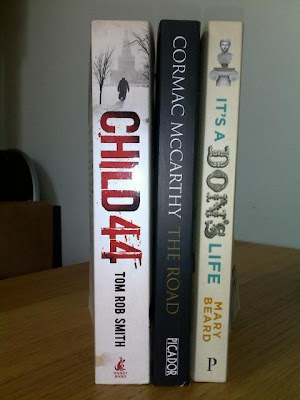 Less impressive stack than last month, but I have been busy. Have already blogged about Child 44 and The Road.

I'd read most of it before, but there's something different about the book - selected, edited, bound in paper - that makes it more real. Beard herself muses on what is lost from the blog - the links, the interaction with commentators (some of them, I notice, my mates). Books and blogs mean different reading experiences - still, just. This is the sedate, slower-moving version, for putting down to posterity.

It's full of fun stuff on the world of classics. The Romans understood the word "barbarian" as we do "terrorist"; we use "paedophile" when we mean "pederast" (in the comments); 10 top facts about the Romans...

She's often funny, with an eye for the absurd detail. There's the inevitable vicarish use of any incident to enthuse, "in many ways, that's like the story of..." - in her case a Greek or Roman text rather than Jesus - but mostly with some new insight to offer. She doesn't need to tell us that classics is still relevant today but shows it by example.

I could have done without the repeated defence of the interview, living conditions, examination and culture of Oxbridge students. As an alumnus of a trendy New University and then of a red-brick, I have a bias against sympathy for the nobs. A post listing her day's emails is also an odd choice for this best-of.

But generally it's a fun, companionable and layman-friendly read, which prickles in me need to explore the ancient world further.

(I've also read quite a lot of A Short History of Parliament, edited by Clyve Jones, as a work thing, plus there's a stack of other research books littering my desk. And I'm on p. 107, p. 124 and p. 341 respectively of other books, so next month should be a bonanza.)
Posted by 0tralala at 12:12 pm