I've nicked this from a chap called Roo Reynolds, whose own blog I stalk. Here are the books I've finished this month: 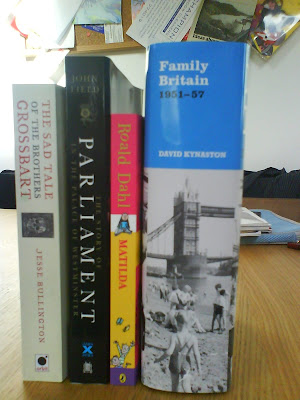 "The Sad Tale of the Brothers Grossbart" by Jesse Bullington
Reviewed this for Vector, so I'll blog that later this year. But spectacularly not my cup of tea and I struggled to find anything nice to say. Sorry, Jesse. Amazon's reviewers clearly like it.

"The Story of Parliament in the Palace of Westminster" by John Field
A rather dry, worthy and partisan history of the buildings most people refer to as the "Houses of Parliament" - you can tell Field was a teacher. Some periods in history are lavished in detail, others barely get a mention. For example, Field abruptly jumps from the Second World War to the end of the 20th Century, with a rant about democracy now and our place within it.

Yet there's plenty of fascinating top facts and insights. There's the appalling comedy-of-errors as bureaucracy and petty politics, committees, inquiries and an ever-changing brief hamper the building of Pugin and Barry's new palace in the mid-Nineteenth Century - and killed off both those men. The frescoes of radiant British history famously came out too dark because of the inclement British weather, while the over-large statues of major British figures were quietly moved elsewhere. It leaves you amazed that we ever had an Empire. You can almost believe the old argument that we took Africa and India more by accident than design.

I was also fascinated by subtle changes wrought on the constitution during the brief reign of Edward VI. His dad, remember, had broken off from the Catholic church so as to get a new wife (which is why anyone from the Church of England who speaks against divorce and remarriage should be beheaded for Treason). During Edward's reign (with my emphasis in bold),

"The 1548 Parliament passed the First Act of Uniformity, which introduced an English prayer book, imposed penalties for non-observance, and ordered the suppression of both images and Latin primers. It was the first occasion when religious practice had been proscribed by a secular authority. The Second Act of Uniformity followed in the 1552 Parliament which required every subject to attend church on Sunday, at one of the rechristened services of morning prayer, evening prayer, or the Lord's supper. This Act was the beginning of 'keeping Sunday special'. It was accompanied, appropriately by an Act for the control of alehouses by Justices of the Peace, when liquor began for the first time to be licensed."

John Field, "The Story of Parliament in the Palace of Westminster", p. 79.

So "keeping Sunday special" was a specifically anti-Catholic measure, not our version of the Sabbath. It's also worth noting that Edward VI did not so much rule himself as governed through helpful "uncle" figures and Parliament - nearly a century before Oliver Cromwell, let alone the constitutional monarchy of William and Mary.

It's packed with stuff like this. Another favourite is in 1842, when the non-parliamentary Royal Fine Arts Commission held a competition for the interior decoration of the new palace, with two notable firsts:

"Cartoons were invited, either of subjects from British history, of of scenes from the works of Spenser, Shakespeare and Milton. The exhibition [of these] was the occasion for Punch to appropriate the word 'cartoon' and apply it for the first time to comic subjects, the magazine's own spoof entries. It was the first time that state patronage had been offered to artists."

Field is right that the palace today still feels like a gentleman's club, with arcane rules and traditions deliberately aimed at tripping up the newcomer. He's also good on Lords reform, and the value of individuals of experience and with ostensibly less party allegiance to the scrutiny of Bills. So plenty of valuable research and insight, but the phrasing and grammar could be better, and there are odd concentrations of focus which mean the book loses a few marks.

"It's a funny thing about mothers and fathers. Even when their own child is the most disgusting little blister you could ever imagine, they still think that he or she is wonderful."

I've long meant to remedy the Dr's ignorance of the works of Roald Dahl. This was a perfect place to start, with a small, bespectacled and earnest girl who was reading newspapers at the works of Charles Dickens at the age of five. She was quite enthralled.

It's odd for me reading it again how thrilling and vivid it is, with Dahl simply and elegantly drawing us in to the adventure. It struck not only how black and white his characters are - villains like Matilda's parents and Miss Trunchball are 100 per cent villainous - but that this reflects a child-like view of grown-ups. There's no sense of these adults having once been children themselves - Miss Trunchball denies that very thing - or of their characters and outlooks developing. What, I wondered, went so wrong to turn Miss Trunchball into such a monster?

It also seems of its time, with Dahl sniffy about television and Matilda's dad a brash, conscience-less small businessman, reaping the boon of the Eighties. The plot is about a young girl taking charge of her life and reclaiming a stolen inheritance - just like the Victorian novels that Matilda reads. But it's also about the pernicious greed of its age.

It also seems odd now that Dahl recommends Hemmingway and, "Brighton Rock" to the children readers, and quotes from Dylan Thomas' haunting, "In Country Sleep". And I'm delighted this edition includes writing tips from Dahl, which includes his "constant unholy terror of boring the reader". We're already working our way through more of Dahl, so will blog some more on him soon.

"Family Britain 1951-57" by David Kynaston
I loved "Austerity Britain", which I read last year and singularly failed to blog. This picks up the story, a whopping, fat mash of diary extracts, political journals, news, sport and current affairs, building up an impression of the era. It's utterly compelling and covers such enormous ground. Kynaston's got an eye for details which inform or reflect the worries of our own age - the terror of "coshing" from teenage boys, the fury of the tabloid press, the floods and train disasters and the impact of invading - in this case, Suez - without a UN mandate. The truth is just starting to come out as the book closes, with Prime Minister Eden's explicit lie to the Commons about there having been no secret plot with Israel.

Kynaston's also good at explaining the effect of such moments, such as this quotation from the Daily Mirror on 5 November 1956, explaining why everyone must abide by international law if it's to have any meaning:

"'Once British bombs fell on Egypt the fate of Hungary was sealed,' asserted its leader. 'The last chance of asserting moral pressure on Russia was lost when Eden defied the United Nations over Suez.' Almost certainly Khruschev would have acted as he did anyway, sooner rather than later, but undeniably Suez provide opportune cover."

The struggles of the British Communist Party to reconcile themselves to the fate of Budapest - and to revelations about all Stalin had been up to - seem another world, as are the worries about coal fires and rationing, or the assigned roles for men and women. It's the world we live in and another planet - something you can experience with this incredible, haunting slideshow of photographs of the 1950s.

Three choice moments from the book to whet your need to read it: in 1952 in Oxford,

"a thrusting Australian undergraduate had stood for secretary of the University Labour Club and, in defiance of the rule against open canvassing, had campaigned on the slogan, 'Rooting for Rupert'. Complaints were made to the club's chairman, Gerald Kaufman, who initiated a tribunal. The outcome was that young Rupert Murdoch was not allowed to stand for office."

That same year, the forthcoming White Paper about ending the BBC's monopoly on television - allowing the creation of ITV - led to "agitated correspondence" in the Times:

"'This is the age of the common man, whose influences towards the deterioration of standards of culture are formidable in all spheres,' warned Lord Brand. 'It is discouraging to find that it is in the Conservative Party which one would have thought would be by tradition the party pledged to maintain such standards, that many members in their desire to end anything like a monopoly, seem ready to support measures which will inevitably degrade them.' Violet Bonham Carter agreed: 'We are often told the B.B.C. should "give the people what they want". But who are "the people"? The people are all the people - including minorities. Broadcasting by the B.B.C. has no aim but good broadcasting. Broadcasting by sponsoring has no other motive but to sell goods."

Just as today, hacking flesh from the BBC might let other people make money - some of them Tory grandees - but does it mean any improvement in telly? There's an argument now that ITV has suffered not because it's up against the BBC, but because commerical television can only flourish and not dilute the quality of its material while it has a monopoly, too.

And though I don't agree with the sentiment, I loved Churchill's masterful analogy for the political divide at the 1955 General Election:

"'Queuetopia remained Churchill's central metaphor for socialism in action - a term designed specifically to appeal to housewives. 'We are for the ladder,' he declared in his election broadcast. 'Let all try their best to climb. They are for the queue. Let each wait in his place till his turn comes.'"

In all the book is a window into an age so much like and so different from our own - an expert piece of world-building, to use the science-fiction term. Interspersed with the names of films and performers, brands of cigarette and clothes, sportsmen and commentators and etc., the impression builds into a vivid portrait. It's a place of green smog that stings the throat like pepper and shrouds the stage from an opera-going audience, of "National butter", of the slow, slow end of rationing and the first shifts in public opinion on the medieval laws on homosexuality and on capital punishment. A glorious book and enthralling. I eagerly await the next volume.
Posted by 0tralala at 5:44 pm

John Field was my English teacher way back when. Lovely guy, although a bit prone to playing favourites (I was one, so it didn't do me any harm). There were always rumours that he was a little *too* fond of some of the boys, but I never saw any evidence of that. He was really enthusiastic and encouraged creativity and a bit of disobedience.

As for Matilda, it was the final straw for me and Dahl, who I loved as a child but annoys the crap out of me as an adult. I think he hated children - real children, that is, rather than his idealised version of children, always supernaturally clever, perfectly well-behaved and old beyond their years. And he clearly had some issues with women too.

MrK, I think you're wrong about Dahl. He's got plenty of nice women too, but he revels in grotesque characters. Matilda's not a saintly child either - she gets her revenge on the adults. And the other kids at her school are all deliciously naughty.

As for his women, there are bad ones and good ones. The bad ones are very bad, the good ones very good. But that's also true of the men.