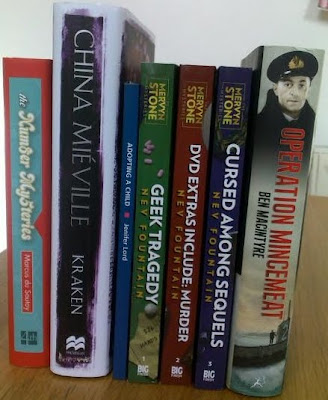 A better result than last month. I read The Number Mysteries by Marcus du Sautoy in preparation for an interview for a job I then didn't get (I also had to give a presentation with a mathematics theme and chose the Monument in London). It's a lively, approachable introduction to lots of big ideas, most of which I kept up with.

It covers five main topics: prime numbers; shapes; probabilities; encryption; and how we can use maths to predict the future. There are exercises to do along the way, and more activities on the website. There are QR codes all the way through the book, too, offering additional insights should you be reading with your phone. Du Sautoy ably delivers his lessons to readers of all ages and abilities - and the back cover quotes come from Richard Dawkins and an eight year-old.

It's an engaging and informative book, and proved useful for both my interview and the Astronomy GCSE I've just started. How brilliant to understand how prime numbers might helped cicadas evolve defenses against predators. But, just as at school, I struggled to maintain interest when the numbers were all in the abstract. It's the application of the numbers to solving real-world problems that most excites. Interactive content won't in itself help make the thought-experiment stuff any more enticing.

Kraken by China Mieville was a bit of a disappointment after the glorious and award-winning The City and The City. A whopping great specimen of a Kraken in formaldehyde vanishes from the Natural History Museum, and curator Billy Harrow soon finds himself in amid the increasingly weird underground of competing religious groups with vested interested. While Mieville's work has often been so compellingly original, this felt too often like a knock-off Christopher Fowler, and I found the jokes about Star Trek and pop music a bit trite. It's a fun knockabout thriller with some nice ideas and surprises, which any other day would be quite a recommendation.

Adopting a Child is a guide produced by the BAAF and is part of our initial efforts into the Plan B Spawning Project. Have read various other bits and pieces sent by councils and charities, but they don't count as books.

I'm working on the publicity for Nev Fountain's Mervyn Stone Mysteries, so got to read advance copies ahead of hardbacks and leather-bound editions coming out later this month.

And finally, Operation Mincemeat which is a superb bit of work by Ben Macintyre, whose Agent Zigzag I also adored. It's the true story of the man who never was, the dead body planted on a Spanish beach with fake papers in World War Two, to convince the Nazis that the Allies were going to invade somewhere that they weren't.

Macintyre seems to have followed up every possible lead and angle, speaking to the people who were really involved or their families, in the UK and Spain and Germany. He's got a brilliant eye for odd and telling details - there's the man on page 43 who "never wore a hat", or the tradecraft description on page 71 of "wallet litter". The story is fascinating - the plot itself concocted by a bunch of thriller writers - with an extraordinary cast of extraordinary people. A marvel of a book.
Posted by 0tralala at 8:10 pm

I'm so sad, I only read this month's to the end 'cos I recognised Ewan Montagu's picture. No idea there was another book about him.

I know what Nothing Tra La La is now! I finally saw "Labyrinth"!