To the British Library last night for a “Late at the library” event. There was Victorian Values – a lively show by the Ministry of Burlesque. There was the chance to dress up and have pictures taken by Madame la Luz's Photographic Parlour. A splendid brass band played versions of “YMCA” and “Bohemian Rhapsody”. And there was a high proportion of slapped-up goth girls in the audience, bursting from their clothes. Though I, er, didn't really notice. 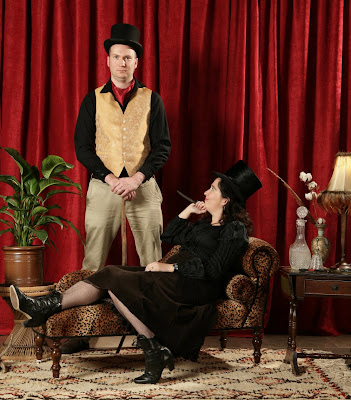 There seemed to be too audiences for the event – the goths affecting the age with barely corsetted flesh and those wanting to perambulate round the Points of View exhibition (free until 7 March 2010), which tells the history of photography through some rare and extraordinary images.

We ably straddled both factions. The exhibition is glorious – and free. There's film explaining the difference between the Daguerre and Fox Talbot methods, and a wealth of nineteenth century capturings from all round the world.

The Dr was thrilled by the archaeological specimens – including that famous shot by Corporal J McCartney of Charles Newton and the ropes round the lion of Cnidus, on which she wrote a book. I loved Philip Henry Delamotte's images from the construction of the Crystal Palace in Sydenham, including my beloved monsters.

There was also the splendid Victorian hippopotamus and an astonishing nineteenth century photographic atlas of the moon, and photography changing our understanding of family, history, science and our own time. The explanatory panels delved into the politics of photographing empire and criminals, and the assumptions made by the “reality” of the image. There were gems embedded all through the thing, and I will have to go again.

It perhaps dwelt too much on the process and practice of photography, with less on the way the ordinary punter might collect, display and use the images. And, of course, the shop was shut by the time we came out, so there was no chance of checking which images exist as postcards.
Posted by 0tralala at 4:18 pm

Amazing. That looks like so much fun. The exhibition is ongoing, you say? Hopefully I'll get to see it. Love the photos, too, that sounds so great!