What a splendid episode of Doctor Who. Will leave a little space for spoilers in case you have not seen it...

[Incidentally, I have written a diary of writing Blake's 7. And here is a nice photograph of me with stars Benedict Cumberbatch and Carrie Dobro. It will thrill you to know that this was taken outside the offices of Innocent Smoothies, of which I am an acolyte. Om nom nom. 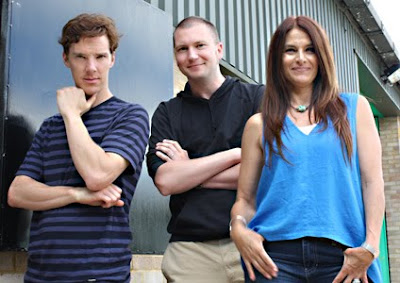 End of spoiler space, back to Doctor Who.]

Perhaps not scary in a make-you-jump way (though I'm told by parent-friends that their kids were traumatised), but disturbing-scary because you knew they were all going to die, and because the Doctor walks away. And then...

It reminded me of the bit in School Reunion where Sarah tells the Doctor he can't save her from getting old; it's a really bothering and grown-up idea that sometimes people can't be saved. Kept me awake last night mulling it over.

I also loved the Jerking Deaths when people aren't looking. And how brilliant to make the Doctor saving everyone sinister. I also liked him calling "fixed moments in time" just a theory, so we can ignore it when we want to.

Yes, of much interest to a mercenary hack like me is the gaps it leaves for other stories. Most importantly of all, I don't think it contradicts a key work of Ice Warrior history.

Also watched Sarah Jane and Mona Lisa's Revenge, and afterwards as I chopped parsnips tried to reconcile it with City of Death, in which that portrait of Lisa Gheradini spends 400 years bricked up in a cellar and has “This is a fake” written in felt-tip under Leonardo's brushwork. Why didn't she reach critical mass in the cellar?

This sort of thing is what passes for fun in my house when the Dr is out.

Both the Doctor Who and Sarah Jane stories note that Lisa didn't have any eyebrows, as was (probably) fashionable at the time. But they don't mention some other interesting things about that portrait. Lisa sits high up on a balcony, a mad fantasy landscape behind her. As the landscape recedes into the distance, it fades to blue-green murk, an early example of aerial perspective – that is, the affect of the Earth's atmosphere.

That fantastic background contrasts with the calm posture of the sitter. And that enigmatic smile isn't gas or not being able to sit still; the effect is created by shadows at the edges of the mouth and eyes, a technique called sfumato (that is, as if seen through a veil of smoke).

So I had embarked on a complicated theory involving as-yet-untold interventions by the Doctor, Leonardo seeing an alien world through a veil of smoke and learning about the Earth's atmosphere. And then Lizbee tweeted a fine, indeed handsome, answer which is all a lot easier on the brain:

“Only the one painting was made of living ink; Leonardo had enough for the first six? Figures the psycho one would be fireproof...”

On your spoiler space filler: I used to be an acolyte of Innocent Drinks myself. I may have even have genuflected when I attended some of the Shalka recording at the same venue. But then the not-so-Innocent idiots accepted a huge investment from Coca-Cola. I have been boycotting them with a fiery passion ever since.