After my post on Kingdom Come, a shrewd friend recommended me Alex Ross's earlier work, Marvels, originally published as a four-part mini-series in 1994. Written by Kurt Busiek, Marvels revisits apparently well-known events from Marvel Comics storylines, but from the perspective of an ordinary human. Phil Sheldon is an ambitious news photographer, torn between wanting to be an active participant in history and the debilitating sense that superheroes leave the rest of us impotent.

It's a brilliant idea, beautifully presented with high quality painted artwork on high quality paper. The endnotes show how cleverly the plot weaves between events established in decades-worth of comics - though much of this stuff was new to me, a sporadic comics reader. More telling, I thought, was the way the story acknowledges the contradictions in the history: Human Torch and Sub-Mariner battle as mortal enemies, then are friends, then battle Nazis together, then battle one another again when Sub-Mariner for some reason turns on humanity... I guess readers - fans - familiar with the original stories would know what occasioned these abrupt switches of loyalty and motive, but Sheldon's distance from the heroes means it is here left unexplained.

Sheldon never gets close to his marvels - there's no exclusive access as when Lois Lane interviews Superman, or when Peter Parker tells us what Spider-Man is really like. The closest encounter, when Sheldon is near Spider-man at the time of Gwen Stacy's death, is still at a remove. The result is that for all the years he studies them, the heroes remain out of reach, aloof, and Sheldon can offer little insight or perspective.

That is probably the point. At the human level, Sheldon can intercede, such as when he calls out the hypocrisy of the newspaper editor Jonah Jameson from the Spider-Man stories: 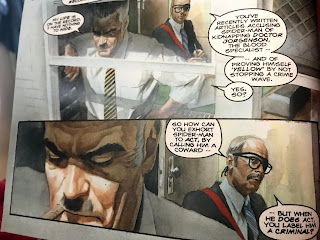 Or there's the moment he turns on the population of New York for their (and his own) fickleness, praying for salvation in times on crisis and then turning on the superheroes the moment danger has passed. What with everything at the moment, the following panel struck a chord: 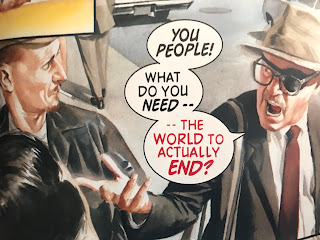 That feels just as real and innovative for the medium as the extraordinary artwork, and I can understand the impact Marvels had on its original release. Stan Lee, no stranger to hyperbole, speaks in his foreword of it being, "a new plateau in the evolution of illustrated literature" - that last word a claim to respectability, high art, the canon.

Such pretensions are of their time. Marvels is solemn and portentous in that 1990s comics way. The engaging, playful wit of the Marvel movies is seriously lacking. It's an impressive, arresting accomplishment, but feels more DC than Marvel.
Posted by 0tralala at 11:36 am