How to Build a Universe, by Brian Cox, Robin Ince and Alexandra Feachem

This book accompanying Radio 4's science panel show The Infinite Monkey Cage is largely a collection of debates addressed on that programme, resisted with further detail and insight. I should declare an interest having been a panelist on the 2015 Christmas special - though unlike Robin's I'm a Joke and So Are You, there's no reference to that episode here.

There are six chapters - Introductions & Infinity; Life, Death & Strawberries; Recipe to Build a Universe; Space Exploration; Evidence & Why Ghosts Don't Exist; Apocalypse - but the material is peppered with asides, footnotes, illustrations and pull quotes. The chapter on building a universe is by far the longest and hard-going, Robin advising us to wade into it as far as we can then stop and start again, hoping to progress a bit further on the each subsequent attempt. At the end, we're presented with illustrations of badges as rewards for making it that far. For all the equations and technical language, I don't think it is (only) the degree-level physics that makes the going tough. The book offers less a single thesis as per a bullet shot from a gun, so much as a range of ejecta shot out of a blunderbuss.

If I'm familiar with a lot of the material - even if I don't wholly comprehend it - there was lots that was new, and loads I'm very taken by, such as this:


"This is the beauty of books, they are secondary human fossils. We may leave behind bones, skin preserved in a peat bog, perhaps eventually a fossil, but books are our mind fossils, the fossils of our thoughts that are left after we are gone. We appear to be the only creature that can interrogate minds even after the owner of those thoughts has died." (p. 242)

There's some fun stuff, too, on the credibility of the science in sci-fi - the subject they quizzed me about when I was on the show.

It's interesting to hear that Brian and Robin argue. When they revisit some of those arguments here, there's a sense that the good-natured discussion in print follows a less amiable row. I'm not sure I agree with some of the assumptions made in the book, either. For example, here's Brian citing a case for greater exploitation of space.


"I recently spoke with Jeff Bezos, founder of Amazon, at his Blue Origin rocket factory in Seattle. His vision is to zone Earth as residential and light industrial, in order to protect it. We've visited every planet in the Solar System, he said, and we know with absolute certainty that this is the best one. That's why his company is called Blue Origin, after our precious blue jewel of a world. Spaceflight does not increase pressures on our world by consuming valuable resources; it is a route to protecting our world by enabling us to grow in a richer and more interesting civilisation whilst simultaneously consuming less of Earth." (p. 152) 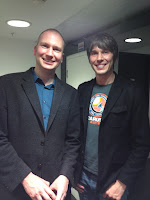 I think the first part of that paragraph is a sales pitch and the final sentence is wrong. After all, how do we get into space to access this bounty of resources? Rocket launches produce 150 times as much carbon dioxide as a transatlantic flight - when it's argued that rocket launches have low environmental impact it's because they are infrequent. They also seem to damage the ozone layer and leave space junk in Earth orbit. Are we also to assume that the resources mined in space and the people who fly out to mine them will not be returned to Earth?

But then I think that's the point of the book: it's the book of a panel discussion show aimed at provoking further debate.
Posted by 0tralala at 3:06 pm