The Couch on which John Hunter Died

The Hunterian Museum at the Royal College of Surgeons in London is a fascinating place full of dead things in jars. The surgeon John Hunter (1728-93) collected specimens of lizards and other animals, using them to teach the next generation of doctors.


"While most of his contemporaries taught only human anatomy, Hunter's lectures stressed the relationship between structure and function in all kinds of living creatures. Hunter believed that surgeons should understand how the body adapted to and compensated for damage due to injury, disease or environmental changes. He encouraged students such as Edward Jenner and Astley Cooper to carry out experimental research and to apply the knowledge gained to the treatment of patients."
- Hunterian Museum website

It wasn't just medicine that benefited from Hunter's collection. In 1824, Gideon Mantell tried to match a fossilised fragment of jawbone he'd discovered to a comparable modern-day creature. He visited the Hunterian Museum, where assistant-curator Samuel Stutchbury saw a resemblance - in shape if not size - to a specimen of iguana. The following year, Mantell announced to the Royal Geological Society the discovery of Iguanadon - "iguana-tooth". Along with the fossilised remains of two other creatures, Iguanadon would later be used to define a new kind of animal: the dinosaur.

I visit the Hunterian Museum a fair bit, most recently to look up what it has to say on regeneration - the way some animals are able to regrow lost limbs. (I should also declare an interest: my dad volunteers there and gives a good talk every other Friday on the history of syphilis.)

The collection, though, is not just of animals: there are also plenty of human bodies - whole ones as well as partial bits of interest. If this can leave visitors feeling a bit squeamish, the ethos is very clear: by better understanding the body and how it can go wrong, we can better mend injury and cure disease. That said, deciding what specimens count as "better understanding the body" can be open to debate, such as the museum continuing to display the body of Charles Byrne, the "Irish Giant", against his clearly stated views. 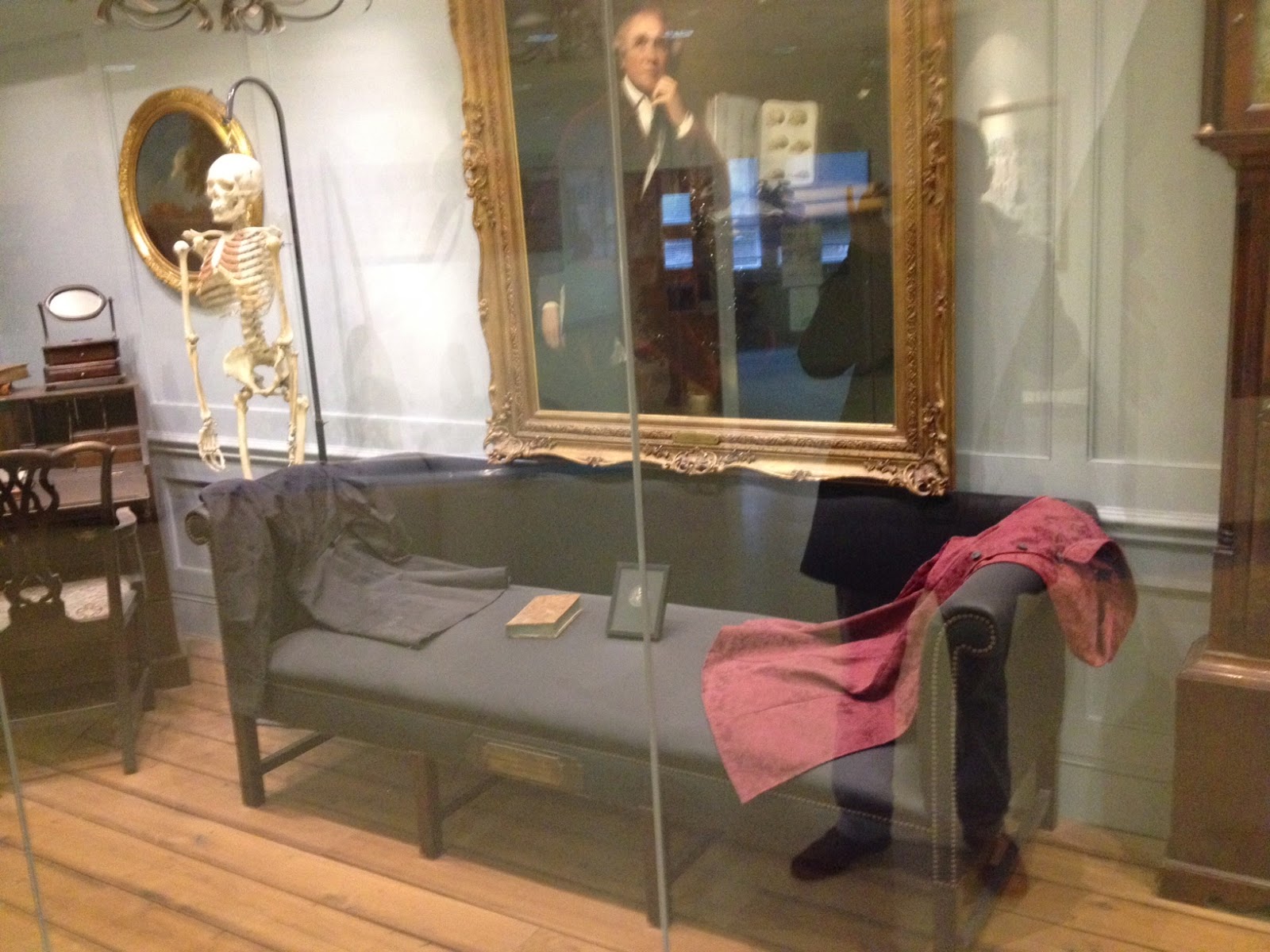 I don't have a problem with Byrne's skeleton being displayed, but I was struck by something else I saw this week. By the reception of the Hunter Wing of St George's Hospital in Tooting there's a display devoted to Hunter. The hospital has just done very well in the results of the Research Excellence Framework for 2014 and links its current research to the precedent set by Hunter - who worked at St George's, but back when it was based at Hyde Park Corner (the hospital moved in stages between 1976 and 1980).

I can see why it might not be appropriate to show medical specimens as people go to their medical appointments in the hospital - it would be too blunt a reminder of our inevitable fate. But is the couch on which Hunter died a more tasteful relic for display? It doesn't seem to do much for the better understanding the body. I find myself more bothered by that the bones of Charles Byrne. 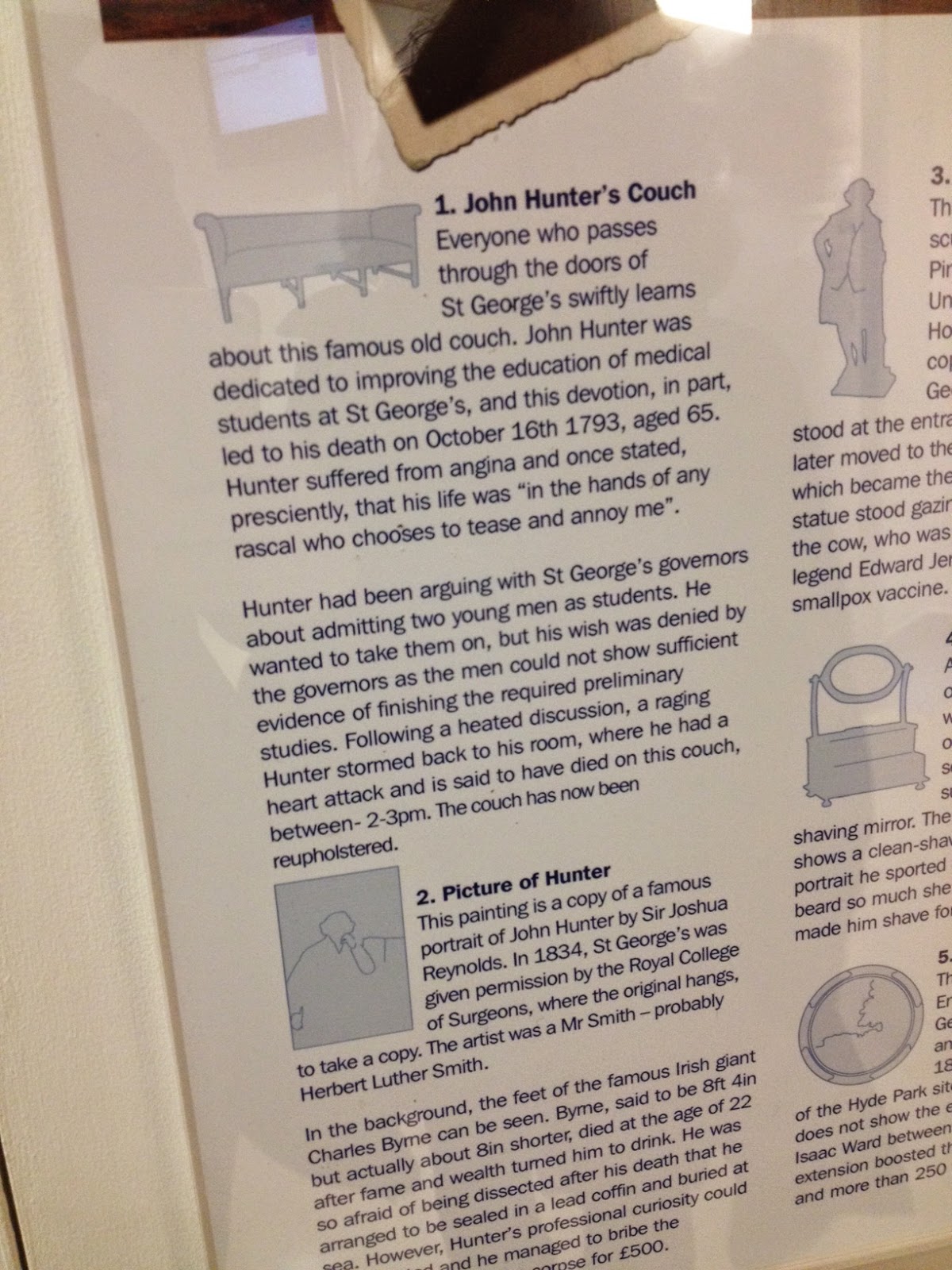