On 10 January, 49 BC, Julius Caesar marched his army south over a small river called the Rubicon - and the world changed. It was not the size of the river that mattered but that it was a border. Caesar was breaking a sacred law by taking an army into Rome - that single act is often seen as the pivotal moment in the collapse of the Roman Republic.

Tom Holland's Rubicon (2003) is excellent at explaining why, and charting a hundred years of history to give us the full context. Comprehensive, insightful, dryly witty and full of telling detail, its an excellent book - I only wish I'd sooner heeded all those who told me to read it.

I already knew a lot of the story from studying Asterix books and Shakespeare's plays, and watching I, Claudius and Rome. More recently, I loved Imperium and Lustrum, Robert Harris' excellent Cicero novels, as told by his slave Tiro (who invented shorthand and in some ways the parliamentary reporting job I do now).

There's a reason the fall of the Republic is so well known. Partly, it's because so much of the legal and political systems of Western civilisation are based on those of Rome. That's why the books and TV dramas still resonate so strongly. Harris, for example, makes Cicero's political wheeler-dealing feel entirely modern.

Holland doesn't make those pat analogies, thank heavens, concentrating instead on the personalities and culture. He's especially good at conjuring the worldview of the time.


"As ever, [Caesar] loved to dazzle, to overawe. The building and levelling of a bridge across the Rhine had served only to whet his appetite for even more spectacular exploits. So it was that no sooner had Caesar crossed his men back into Gaul than he was marching northwards, towards the Channel coast and the the encircling Ocean.

Set within its icy waters waited the fabulous island of Britain. It was as drenched in mystery as in rain and fog. Back in Rome people doubted whether it existed at all. Even traders and merchants, Caesar's usual sources of information, could provide only the sketchiest details. Their resistance to travel widely through the island was hardly surprising. It was well known that barbarians became more savage the further north one travelled, indulging in any number of unspeakable habits, such as cannibalism, and even - repellently - the drinking of milk. To teach them respect for the name of the Republic would be an achievement of Homeric proportions. For Caesar, who never let anyone forget that he could trace his ancestry back to the time of the Trojan War, the temptation was irresistible.

... It was indeed to prove a journey back in time. Waiting for the invaders on the Kentish cliffs was a scene straight out of legend: warriors careering up and down in chariots, just as Hector and Achilles had done on the plain of Troy. To add to the exotic nature of it all, the Britons wore peculiar facial hair and were painted blue."

Tom Holland, Rubicon - The Triumph and Tragedy of the Roman Republic, pp. 274-5.

As a result, we get a sense of why the Romans found Caesar so extraordinary. His "invasion" of Britain was hardly a success, and yet:


"Even the lack of plunder did little to dampen the general mood of wild enthusiasm ... In their impact on the waiting public Caesar's expeditions to Britain have been aptly compared to the moon landings: 'they were an imagination-defying epic, an achievement at once technical and straight out of an adventure story'."

I had some sense of the brutal power of the Roman war machine having read Mortimer Wheeler's The Siege of Maiden Castle, England - read it; it's a brilliant reconstruction based on the archaeology, and informed by Wheeler's own hellish experience of World War One. With similar ghoulish delight, Holland describes over five pages (pp. 277-81) Caesar's siege of Alesia (near modern Paris), where he was vastly outnumbered and facing an implacable foe in the Gaulish leader Vercingetorex.

At one point, with the town starving, Vercingetorex sent the women and children out of the town, trusting that Caesar's army would not kill them. They did not; but nor did they let them pass, and the women and children were left to starve to death outside the town walls, Caesar shaming Vercingetorex in the most appalling way. Yet it's hard not to admire Caesar at this point.

He ought to be a monster, and yet somehow he's a hero. Though that's not quite how the story was depicted in Asterix: 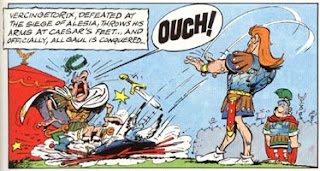 Incidentally, I have a pet theory that Asterix's blacksmith, Fulliautomatix (Cétautomatix in the French original) is based on the famous sculpture "The Dying Gaul":

The Dr tells me that nineteenth century classicists had much fun pointing out the likeness between the statue and the eminent archaeologist, Adolf Furtwängler...

Anyhow, we were talking about Caesar. The one thing I'd never quite understood was why Caesar decided to break the rules of the Republic, so sacred for centuries, and make himself dictator - effectively a king. Holland shows how previous bully-boys such as Sulla ended up, and suggests that Caesar was more than merely yet another Roman gangster.

He also shows us how shrewd an operator and gambler Caesar could be, playing the system to advance to the top. And he suggests that Caesar's sex life was not wanting. In readings of Shakespeare, and in the series Rome, Egypt is the decadent fallen empire, the temptations depraved and libidinous. It had strategic value because it supplied grain to the Roman empire - so anyone who ruled Egypt had a leash round the throat of Rome. But for all that, I never quite got why Caesar fell for it so completely.

And then Holland opens a chapter with a glorious bit of scene-setting:


"The coastline of the Nile Delta had always been treacherous. Low-lying and featureless, it offered nothing to help a sailor find his way. Even so, navigators who approached Egypt were not entirely bereft of guidance. At night, far distant from its shore, a dot of light flickered low in the southern sky. By day it could be seen for what it was: not a star, but a great lantern, set upon a tower, visible from miles out to sea. This was the Pharos, not only the tallest building ever built by the Greeks, but also, thanks to its endless recycling on tourist trinkets, the most instantly recognisable. A triumph of vision and engineering, the great lighthouse served as the perfect symbol for what it advertised: megalopolis - the most stupendous place on Earth.

Even Roman visitors had to acknowledge that Alexandria was something special. When Caesar, three days after Pompey's murder, sailed past the island on which the Pharos stood, he was arriving at a city larger, more cosmopolitan and certainly far more beautiful than his own. If Rome, shabby labyrinthine, stood as a monument to the rugged virtues of the Republic, then Alexandria bore witness to what a king could achieve."
Ibid., p. 325.

And it all clicked into place.

I've concentrated on Caesar here, but Holland's book is dense with characters, strangeness and wonder - a history to be savoured, then pored over again.
Posted by 0tralala at 10:23 pm