Vision On: Bleach for Kids

M'colleague Web of Evil shared with me the wonder that is Vision On - A Book Of Nonsense With Some Sense In It, an annual tied in to the TV show Vision On, published by the BBC in 1970 and on sale for 12s 6d. (My edition, obviously, came from the wonder that is Abebooks.)

It's edited by the show's producer Patrick Dowling, with contributions from presenters Tony Hart and Pat Keysell. The first page explains that,


"This is a sort of alphabet book for anyone who likes painting or drawing".

But, just to be different, it's not in alphabetical order and starts with L (for lightning). Over 60 pages, it takes the precocious child reader through everything from photographic effects to sign language, with all sorts of things to experiment with rather than copy and a lot of terrible jokes. The black-and-white photo-strips of a tortoise called Humphrey being grumpy with a small girl called Susanne are chillingly surreal.

The book is a fascinating snapshot of another world, and there's loads to enjoy in its range and the effort that's clearly been put in to being both concise and extraordinary. The design is unsophisticated compared to modern kids' publishing, but they've struggled to make the most of the cut-and-paste layout and (mostly) two-colour printing.

I love the full page portrait of Winston Churchill made from Ms, Vs, 1s, &s and full stops.


"In fact this picture was made by computer ... The computer input scans a photograph deciding how grey each tiny area is, choosing a letter to match, and then the outline printer rattles it off."

How mad that the subject for this display of cutting-edge technology is the late and reactionary Prime Minister. But best of all is page 36, which encourages readers to experiment with bleach. 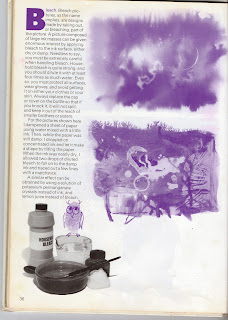 More about Vision On at It's Prof Again.
Posted by 0tralala at 5:07 pm