On Thursday, the nice people at Virgin Media organised a showbiz soiree and awards ceremony for those of us what got shortlisted in the Virgin Media Shorts competition 2012. First, director Tom spent the afternoon at the BFI schmoozing with the other directors, getting good tips and free booze. Here is an exclusive photo he took from that part of the day: 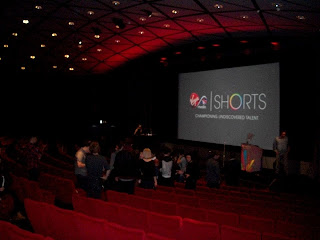 Me, Adrian Mackinder and Mrs Tom had special pink VIP tickets for the evening do (which I think meant we had to queue longer than the people with bog ordinary tickets, but anyway). We were given nice booklets with interviews with each of the shortlisted directors, including Tom doing his best impression of Sir Roger Moore: 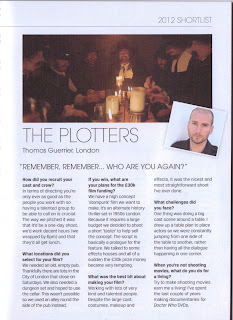 NB That interview talks about what we hope will be our next project, though I prefer "Coronation punk" to "atompunk". The main ticket area of the BFI sported cool displays of props and behind-the-scenes photos from the 13 films. 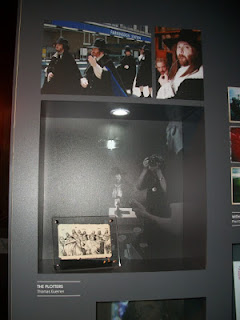 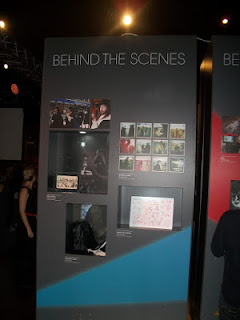 Above our heads were the amazing posters produced to promote our films. Here is our one: 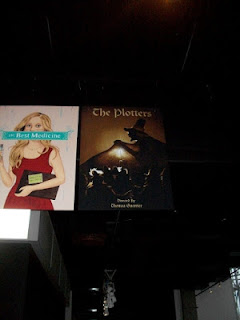 Then us pink-ticketed VIPs were called to take our seats for the awards ceremony. You can see that I took the instruction on my ticket to "dress to impress" more seriously than the other two layabouts. I mean, Tom isn't even wearing a tie. (It took me half an hour to knot that bow tie, as I think I may have told everyone.) 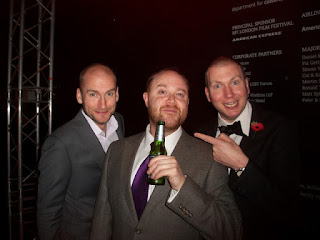 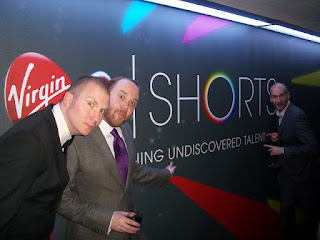 While we waited for the rest of the audience to show up, we drank small bottles of Champagne through straws. This would later turn out to be something of an error, but it seemed good fun at the time. Adrian's colleague took the below photo. Excitingly, she turned out to be the granddaughter of Colin Douglas who played Reuben in The Horror of Fang Rock. She was very impressed that I knew this. Or perhaps a little scared. And this was only the beginning of my amazing Doctor Who-related celebrity spotting. 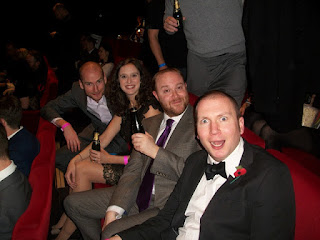 Danny Wallace did the hosting, and Tom was called down with the other directors to receive a fancy, framed version of the poster for our film. The nice lady in green is Jennifer Sheridan who won the competition with her splendid film, Rocket. 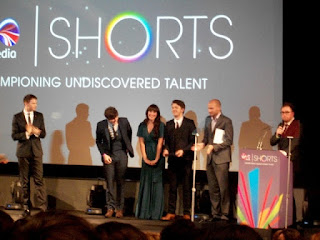 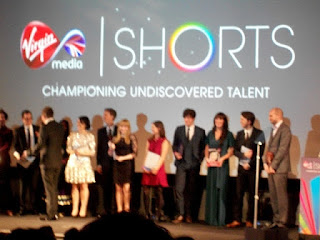 Then they showed the 13 films. The Plotters was on first and got some good laughs. Mostly from Adrian, beside me. 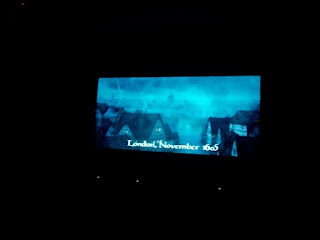 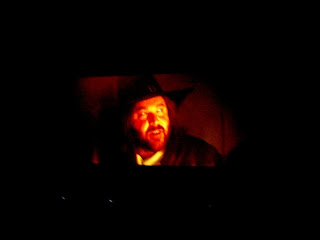 Then Chief Judge Julie Walters announced the winners of the three prizes. She accidentally didn't say The Plotters and named some other films instead, but we didn't like to make a fuss. 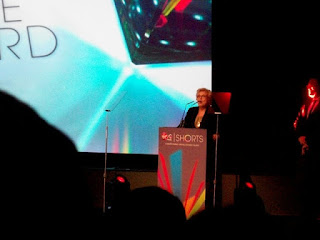 Then it was out again into the ticket hall for booze and schmoozing and perhaps even some dance moves. I got to meet a bunch of the other directors, and said hello to Big Finish's own Lisa Greenwood who - showbizly - I'd last seen in LA, Joe Millson and Andrew and Hannah off of Primeval. I think I spotted Nina Toussaint-White from Let's Kill Hitler there, too, so it was quite a high-scoring night. 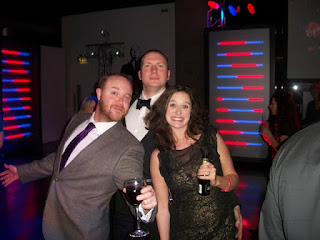 And then, oh God, there were cocktails... 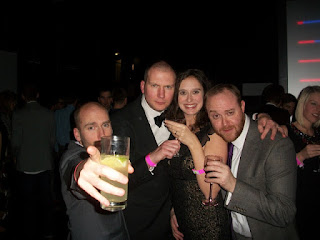