The Plotters - in cinemas! 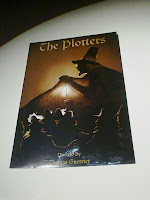 Hooray! Our short film "The Plotters" made the shortlist of the Virgin Media Shorts 2012 competition - and is now playing in cinemas around the country, as well as being online and on the OnDemand service and things.We are thrilled.

Brother Tom (the director) and I attended the bash in Hackney last night to see the shortlisted films on the big screen and natter to the other entrants. I even got to say hello to Andrew Lee Potts (director of "Little Larry"), who I last met on the set of Primeval when I was writing my book.

Excitingly, the Virgin team also had posters made for each of the 13 shortlisted films, and we're delighted with our own (see right).

As well as seeing it on the big screen, you can also watch “The Plotters” for free online, on TV (via Virgin Media's On Demand service and its Shorts Tivo® app) and on your mobile phone (on Virgin's brand new Shorts iPhone app). “The Plotters” and the other 12 selected shorts now compete for £30,000 of funding towards the production of another film, as well as other prizes that will be announced in November. You can vote for your favourite of the shortlisted films, either on the Virgin Media Shorts Facebook page or by tweeting the film's name with #VMShortsVote.

I'll write up a full making-of about the film when I've conquered some pressing deadlines. But in the meantime, Tom has overhauled the Guerrier brothers website and there's loads of material on "The Plotters" with which to amaze your eyeballs.
Posted by 0tralala at 9:14 am