A practical post today. Yesterday, my Daewoo DH-6100P HDD/DVD recorder would not eject a disc. It would try to play the thing but get caught up in a weird loop of cogitation. I tried restarting the machine but that only meant it came on again thinking, "Ooh, a disc" and hit the loop before getting to the stage where it would let me eject. What a clever bit of design.

Googling, Jimlad on AvForums had had the same problem, and I dared to follow his method of taking the bastard thing apart. A little to my amazement, that proved easy enough and the thing is now working. The Dr got to watch the end of Season One of Poldark and of Being Human before the latter's 2.1. Hooray!

I am always in frustrated awe of those who can actually make and fix things. And it's even more enraging when people who can do things don't.

Some 18 months ago, I spent about more than a month and a lot of money getting my bathroom fixed so it wouldn't leak on the people downstairs. It didn't work, and last September we were dribbling again. The Man - my sister's handy significant other - poked about a bit, muttered about cowboys and made a temporary fix.

Today he was back again to do things more finally. We thought we'd remove a couple of rows of tiles, let the dampness dry out over the next few days (we'll be using washing facilities at the gym and a mate's house), then reseal it all double-strength.

Only it never proves that simple. Anything we probe in this house reveals amazing corners cut - as we discovered weeks into living here with our boiler. The tiles round the shower turn out to have been fixed to a painted wall. The paint appears glossy and plastic, so water will run off it, but that also means its like the tiles have been fixed to glass. You put your finger under one tile, and the whole wall comes away. 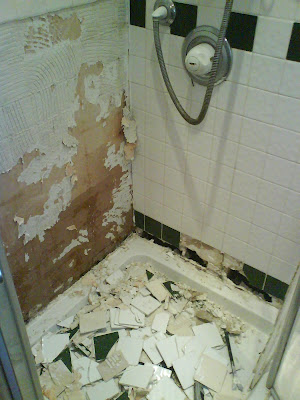 Water has wormed its way through to this slick patch, and leaked right through the plasterboard into the wall behind. This means an interior wall with damp, which is something of a bad thing. We'll set heaters on the wet bits and try and get it sorted. We'll also need more tiles. 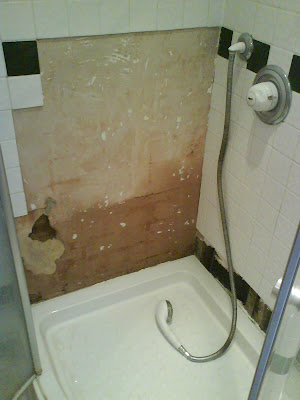 And, just to add to the joys, on the adjacent wall, the bottom tiles came off to reveal a dark hole. The shower mechanism and pipes turns out to be hidden behind a false wall that loses us maybe four or five inches of bathroom - enough extra space to allow us to fit a bath, though we can't afford anything nearly so fancy. It's all tided up now - the Man is very good - but I find even sat here in the next room tapping away that the darkness is looming. 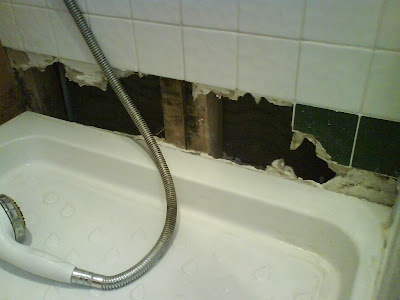 When we replaced the windows in our new kitchen, we found curtains in the wall. Yes, IN the wall.

We've decided that it must be a game that past generations liked to play with our minds. We have resolved to play along in a less malicious way, leaving Sally-Sparrow-a-Grams under the new wallpaper.

warlesy (adj.) - the state of being grim up north.

Oh dear. Perhaps you can turn the experience into a horror story: Grout of Darkness or something...

If you have damp, buy a dehumidifier. Mine is possibly my all-time most favourite thing. My room not being full of mould is bliss!