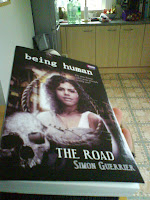 The first copy of my Being Human book, The Road, arrived yesterday, in all its lovely paperback glory. The book is set for release on 4 February, but will probably be seen in shops before then.

By a nice coincidence, in the evening it was Being Human Live at the Curzon in Mayfair, where we got to see the first episode of the new series - on Sunday on BBC 3 at 9.30 for you ordinary mortals.

No spoilers here, but cor that was exciting. The event also had cosplaying vampires and stalkers tumbling about as we waited, and the shiny famous actors up on the balcony, waving at the mob. After, there was a drinkie with the lovely BBC Books lot and then a long trek home.

This morning, the Man came to look at our leaky roof and concluded that it's not leaking. Instead, the snow on the concrete tiles has conjured condensation, which is collecting in pockets of the felt, and then dribbling out. So we've put plenty of cardboard down and will monitor the situation. I bet you're thrilled by this, but it's been quite the drama here.
Posted by 0tralala at 3:44 pm

The cover is exciting- and very purple!

What a lovely book cover.

Now, have you tidied that kitchen, yet?