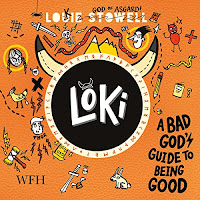 A couple of long car journeys have been greatly aided by this pair of excellent books written by Louie Stowell and read by Ben Willbond. The Norse god of chaos, Loki, is in trouble for playing yet another prank on Sif - this time cutting off all of her hair. As punishment, Odin (or "poo-poo head" as Loki calls him) exiles Loki to Earth, in the puny body of a schoolboy. Worse, Loki must go to human school with oh-so-perfect (but dim) brother Thor, with other gods pretending to be their human parents. And then there's some bother with Frost Giants. 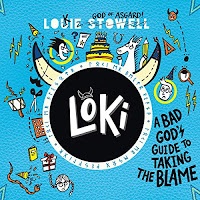 They're two fun adventures full of good jokes - not least where the diary Loki is keeping responds to any dishonesty in his account. There's also lots of comedy at the expense of our mundane, human world as seen by immortal gods. Loki, for example, is astonished by our "crime scenes" full of stolen loot - or, as we know them, "museums".

But there's something deeper here, in a story about a boy who wants to be good but doesn't always think about other people or consequences of actions. In the first book, there's a moral dilemma in his being able to raise a huge sum of money for charity - but only by humiliating his timid friend. The Lord of Chaos wanted to talk about that afterwards, and other bits of the story.

The second book gets into the matter of who tells heroes' stories, and which heroes are left out of these narratives. I'd very much like to see the hinted-at exploration of Cif's previously untold adventures. There's also something on the complex, tricky emotions of friendship that my children found very relatable.

Ben Willbond is a perfect narrator for this, and as well as him doing the different voices (I think there's something of Timothy West in his Odin), sound effects nicely underline some of the jokes - ie when some animal does a poo. All in all, a really good production and a good escape from the traffic.