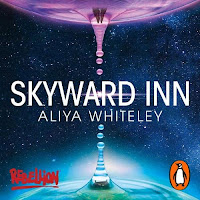 This was the perfect accompaniment to my journey to London and back for the Nigel Kneale centenary, and not only because it fitted the drive time almost exactly.

A long time ago, Jem escaped her home in Devon and young son to cross through the Kissing Gate and journey into space. There she met and bonded with an alien called Isley, then brought him home to run a pub, the Skyward Inn, and reconnect with her own people. But the "brew" that Isley supplies has unusual properties, forging connections across time and memory, even giving visions of the future. As a disease takes hold of the Earth, the community starts to break down, people together and yet somehow utterly alone...

As strange and haunting as Whiteley's previous books, Skyward Inn is full of threat just under the surface, a pervasive wrongness that we can't always quite touch. The last section plays out as a nightmare, as unsettling as any Kneale. It's horrible yet beautiful, too - the prose full of feeling and pathos. We're made to understand why people make the awful choice to surrender entirely to the thing that's happening. The ending hangs on our belief in the strength of a connection between two individuals on separate planets and in different periods of time; it's brilliant.

The book owes something to Jamaica Inn, and is about the cross-pollination cultures. At its heart is the colonisation of another, populated world, its native people not resisting human invasion. As with previous Whiteley, that passivity is deeply unsettling. But this is all mirrored with an incursion by humans from across the boundary wall round Devon (now known as the "Western Protectorate"). There's lots on "good" immigrants bringing needed skills and expertise, deemed more worthy of acceptance than other individuals. There's lots on dysfunctional families and how we choose our connections. There's lots about how we interact and are shaped by interaction. We are our connections.