There will be a Graceless IV 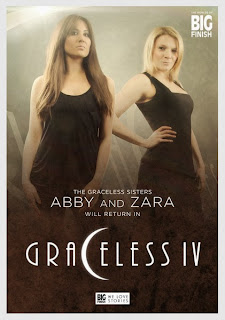 Gosh. Those fine fellows at Big Finish want me to write more of my science-fiction series Graceless, so I am busy scribbling.

As the announcement says:


"Ciara Janson and Laura Doddington are heading back into studio later this year, following the greenlighting of Graceless - Series 4 for a 2016 release. We spoke to series creator and writer Simon as he begins to work on this new set:

"Ha ha! I am thrilled to get to write more adventures for Abby and Zara (though when we last heard from from them they weren't called that any more). But how to bring them back from that rather definitive ending? Well, the answer we've come up with makes me giddy with delight... I can't wait! Get on with writing it, me."

Graceless - Series 4 is available for pre-order ahead of its release in September 2016 at a discounted price on both CD and Download. All three previous Graceless releases are still available, as are the three Doctor Who stories which saw the origins of the series: Doctor Who - The Judgement of Isskar, Doctor Who - The Destroyer of Delights, and Doctor Who - The Chaos Pool."