The Making of Dune by Ed Naha 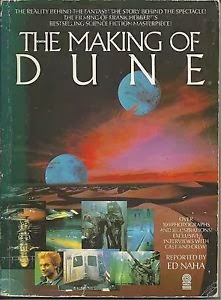 "Please enjoy this book and, most important, enjoy the movie. I have no doubt that there will be more."
Dino De Laurentiis, "Introduction" to Ed Naha, The Making of Dune (1984), p. 2.

I reread and wittered on about Dune last year and, as a result, have been commissioned to write something looking at the book and the film - hurrah. As part of that, I read Ed Naha's The Making of Dune (the film) and am a bit surprised by how little it's been of use.

As a kid, I treasured this book: a holy text of instructions on how to make something so epic and strange. In the first paragraph of his introduction, De Laurentiis (whose daughter, Raffaella, produced the movie), dismisses the standard making-of:


"It has usually been a nice book, telling the world how much everyone who made the movie liked every moment, how the relatively few little problems that arose were quickly solved. Too often, such books are only fairy tales.
Making a movie, an inexpensive movie or one on the scale of Dune, is always an exercise in the impossible. There are no small problems: personal difficulties, technical foul-ups, financial over-runs, the weather, the food - all become major concerns."
Ibid., p. 1.

Yet, unsurprisingly for an officially sanctioned tome, The Making of Dune is largely taken up with how the cast and crew triumphed over the challenges to produce an ambitious, grown-up, effective motion picture that deserves to be a success. As so often in these things, everyone's very complimentary about each other and they praise the food.

That said, there's plenty of interesting stuff on the colossal production:  all the mechanics involved in a pre-digital age, the problems of getting kit through customs, or the cast afflicted by sickness. Some decisions are telling:


"The women's [stillsuits] looked rather unfeminine ... so we redesigned the suits to have larger breasts. That's also why most of the Fremen women characters have long hair. It softens their looks in the suits. It works quite well."
Ibid., p. 72.

But there's almost nothing on the script. When David Lynch - who directed the film based on his own script - is asked why previous scripts had not worked, he answers:

But there's nothing on how he adapted the book: what he thought was essential and what could be stripped back, what needed improving or changing, or even what he felt the book says. "Tell the fans they're making the real DUNE" says an endorsement from Frank Herbert on the back of the book - but the book doesn't address the adaptation.

Why, for example, do we lose Paul and Chani having a child - one killed in the battle at the end? Was it for time or tone, or what? Nor does Paul end up engaged to a princess with Chani accepting her fate as a concubine. The end of the film is taken from one of the later books in the series... There's no discussion of those choices.

In the chapter devoted to him, Lynch talks about reworking the script as they film it, but there's little on what those reworkings might be. Later, there are two brief mentions of changes, and one is a picture caption:


"At right: No longer in the film, this photograph is of the original version of Paul's Water of Life scene. In the final version of Dune, this scene occurs in the desert."
Ibid., p. 186.

The other is right at the end of the book, as the film is in post-production:


"En route to a final cut, only one major story change has been made; the subplot involving Paul's killing of Jamis and his subsequent involvement with Jamis' mate Harah and her children has been completely excised.
'That has caused me some worry,' admits Raffaella. 'That whole sequence was very important in the book. It's a turning point for Paul. We had to eliminate it because it got very involved.If we kept Paul's fight with Jamis in the movie, then we had to deal with Jamis' wife and Jamis' children. It stopped the whole film.'"
Ibid., pp. 289-90.

She refers to the scenes as "boring". Lynch concurs, explaining how he tried to keep the "feeling" of the missing material if not the scenes themselves.

I don't feel I'm being swindled: the front cover promises "The filming of Frank Herbert's bestselling science-fiction masterpiece" (my italics). But Naha is, according to Wikipedia, a "science fiction and mystery writer and producer", so it's especially odd that he ignores the writing. The book rather implies that in making a film, a script is a minor consideration, not at the root of the production. Ignoring that root means there's little depth to this account. That seems wrong for such a complex subject as Dune, and means the making of is little help to me in understanding the film.