Come, Tell Me How You Live by Agatha Christie Mallowan 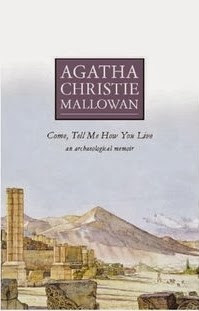 “Agatha Christie remained inwardly detached from archaeology. She relished the archaeological life in remote country and made good use of its experiences in her own work. She has a sound knowledge of the subject, yet remained outside it, a happily amused onlooker.”

Come, Tell Me How You Live is a lively, funny and sharply observed memoir of Agatha Christie's time in Syria in the mid 1930s, assisting her husband Max Mallowan, the archaeologist. Wikipedia says that Christie mixes up the chronology of the real excavations, and there's surprisingly little about what they found and learned from their months of work. This is not a field report but a memoir of happier times, written in the midst of the war.

Christie has an eye for incongruity and oddness, the eccentricities of her friends and colleagues of just as much interest as those of the locals. We get a good sense of her fond, teasing relationship with her husband, and she herself comes across as great fun. She is self-effacing about her size, her anxieties and fussing, but it makes us like her all the more.

Some of the misadventures struck a chord with this anxious writer as I've accompanied the Dr in pursuit of ancient treasures (mostly involving long trips on transport I don't fit on to fields of indiscriminate rocks exactly like the ones seen the previous day).  But mostly it struck a chord because it's a warmer, more joyous read than Christie's murder mysteries.

Even so, there's are moments of darkness. Christie is good on sketching in the horror of the death of a workman, or the threat of sectarian violence. Poirot and Miss Marple are adherents of the death penalty in cases of murder, but when faced with the grisly realities, Christie is squeamish.


“Once when we were digging near Mosul, our old foreman came to Max in great excitement. 'You must take your Khartún to Mosul tomorrow. There is a great event. There is to be a hanging – a woman! Your Khartún will enjoy it very much! She must on no account miss it!' My indifference, and, indeed, repugnance, to this treat stupefied him. 'But it is a woman,' he insisted. 'Very seldom do we have the hanging of a woman. It is a Kurdish woman who has poisoned three husbands! Surely – surely the Khartún would not like to miss that!' My firm refusal to attend lowered me in his eyes a good deal. He left us sadly, to enjoy the hanging by himself.”

But it's a shame there's not more on the archaeology because, when she does address it, Christie is good at making the past vibrant:


“All the Bible and New Testament stories take on a particular reality and interest out here. They are couched in the language and ideology which we daily hear all around us, and I am often struck by the way the emphasis sometimes shifts from what one has commonly accepted. As a small instance, it came to me quite suddenly that in the story of Jezebel, it is the painting of her face and the tiring of her hair that emphasizes in puritanical Protestant surroundings what exactly a 'Jezebel' stands for. But out here it is not the painting and tiring – for all virtuous women paint their faces (or tattoo them), and apply henna to their hair – it is the fact that Jezebel looked out of the window – a definitely immodest action!
... The Good Samaritan story has a reality here which it cannot have in an atmosphere of crowded streets, police, ambulances, hospitals, and public assistance. If a man fell by the wayside on the broad desert track from Hasetshe to Der-ez-Zor, the story could easily happen today, and it illustrates the enormous virtue compassion has in the eyes of all desert folk.”

That observation then leads Christie's group to ask themselves if they would stop to help someone out in the desert. Christie laughs when one man states baldly that he wouldn't - but that he would stop to help a horse. It's not a joke - he means it - but Christie's response is telling. She delights in his blunt honesty, the insight into the dark workings of his mind. Little wonder: it's like dialogue from one of her books.