My first ever rejection letter

Excitement! I have found my first ever rejection letter, received in April 1992 from Gary Russell, then editor of Doctor Who Magazine. I was 15 at the time, and it was just a few months since Gary's interview with novelist Paul Cornell (in issue #181, December 1991) had made me realise that being a writer was something I might actually do, not merely something to dream of like being an astronaut or pop star.

I sent Gary a terrible short story in which the Fourth Doctor and Romana land somewhere and, er, that's it, and surprisingly the response was a form letter: 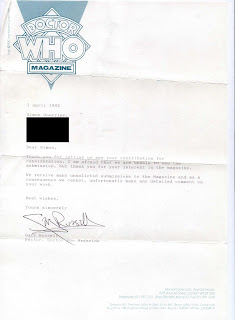 I mustn't have been too disappointed by this first response as I sent Gary more stories. You can see how much better they were by the response I got six months later: 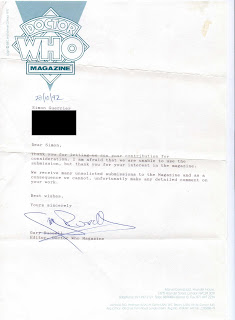 At the same time I also sent a script for a Judge Dredd story to 2000AD, and the form rejection letter I got back wasn't even signed (though someone had asterisked the paragraphs I should pay attention to).

Over the next few years, I continued to send things to Doctor Who Magazine and 2000AD, and also sent in proposals anywhere else I could think of. My first rejection letter from the publisher of Doctor Who books in 1994 was so detailed, generous and encouraging that I probably owe my career to it.

I finally got commissioned by Doctor Who Magazine at the end of 2001, with a two-part feature published in early 2002. Later that year, I also got commissioned to write a Doctor Who short story, in Big Finish's Short Trips: Zodiac. That was edited by Jacqueline Rayner, overseen by Gary Russell. That led to me writing lots for Big Finish, and a couple of years later I helped Gary write form letters in response to submissions.

2000AD turned me down, again, with a form letter just last year.

(Thanks to Gary for permission to post these.)
Posted by 0tralala at 10:13 am

Best thing is the typo in unfortunately which is there in *both* letters.

I think I still have my first story rejection letter from MZB in a file someplace.

Also, the mental image of you showing these to GR to ask if you could post them amuses me MUCHLY.