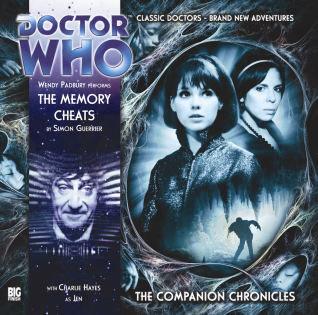 Sorry - a pluggy post. I have a new CD out this month - Doctor Who and the Memory Cheats starring Wendy Padbury as Zoe Heriot and Charlie Hayes (Wendy's daughter) as Jen. The spooky cover is by clever Marcus at Amazing15 (who I also sometimes work with doing daftness for Doctor Who Adventures). Here is the blurb:

Zoe Heriot remembers everything. But she remembers nothing.

A genius with instant recall, Zoe’s mind has been purged of her memories of travelling with the Doctor and Jamie in the TARDIS. And years later she is in deep trouble – prosecuted by the mysterious company that has evidence that she has travelled in Space and Time.

But if that’s the case, why is there proof that Zoe was in Uzbekistan in 1919.

Can the memory cheat?

The story owes a bit to Col. Bailey's Mission to Tashkent, which I have blogged about before. I'm interviewed about the CD in the new issue of free Vortex magazine (issue #31). Look, my name is even on the cover, as if I am a draw.

My next CD is out in November. Doctor Who and the First Wave is the final part of my trilogy starring Peter Purves and Tom Allen. Me and Will Howells went to see Tom's show in as part of the Scipmylo festival in Shoreditch last night, a chat show with guests Stephen K Amos, Katherine Ryan, Ed Byrne and some bloke called Matt Smith.

Will, Nimbos and the Dr will be on Only Connect on BBC Four on Monday. Oh, and there is a Twitter competition to win tickets to the first screening of my short film Cleaning Up.

Think that's everything.
Posted by 0tralala at 12:31 pm