A few things to announce, excitingly. First, I've written for the eleventh Doctor Who. My four-page comic strip "Booked Up" appears in Doctor Who Adventures issue #164, available from tomorrow for a week. Artist John Ross has worked wonders on my silly script: I could not be more delighted.

Also just out is "Shadow of the Past", an audio "Companion Chronicle" featuring Caroline John as the third Doctor's chum Liz Shaw. Am thrilled at how it's come out - the cast and crew really going for the excitement and emotion. Hooray! As a bonus, you can hear me stumble through an interview at the end.

(ETA: Oh! And they've put up a trailer for "The Guardian of the Solar System", out in July. I know what happens but it still makes me tingly.)

And from May (next week!) you can download the audio version of "The Slitheen Excursion", featuring the tenth Doctor and his one-off companion June. This entirely unabridged version is read by Debbie Chazen, who was so splendid in The Smoking Room. 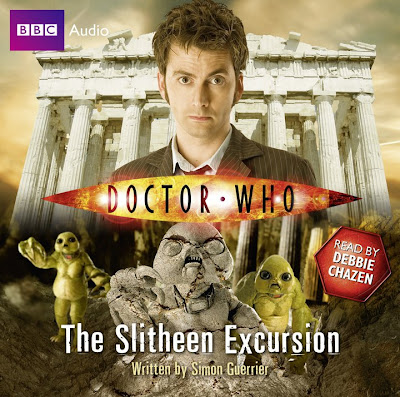 On Sunday, the director of the audio book, Neil Gardner, and I will be speaking on "The Birth of Modern Doctor Who" at Sci-Fi London, along with other slebs. Do come along and join us.
Posted by 0tralala at 3:36 pm

Si, what's with the childish captions all over your strip in this week's Doctor Who Adventures? Tell me those were put there by a sub-editor. They make it look like they think the readers are all brain damaged toddlers. Is there a new dumbing-down brief?

Keep up the good work everywhere else, by the way. A fan.

Uh, what childish captions? It's all mine, I'm afraid.

I *loved* The Shadow of the Past - I've listened to it twice already. Overjoyed at more stories for Liz, who was so sadly shortchanged by the show and whom I love to a ridiculous degree (she, Sarah Jane and Romana are my favourite pre-2005 companions - I go for the smart and sexy ones!).

And congratulations on having written for the Eleventh Doctor.

I don't normally go for the audio versions of the novels - but since this one's unabridged, I shall definitely add it to my Amazon wishlist for a future shopping spree!

(So disappointed I can't make it to the Sci-Fi London event.)

That's very kind of you, Michele. Thanks!

If they had made "Slitheen Excursion" into an audio play, who would you have liked to play June?