After a long day's meeting on Saturday, I hurried down to Selling in Kent to meet the Dr, C. and S. in the pub. The ladies had booked us two nights in a converted hop-picker's cottage with a real fire and plenty of logs. Which was nice. 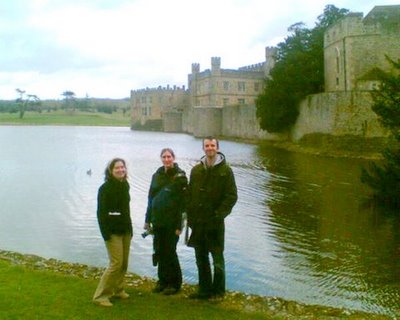 Yesterday, after getting up not too early, we made our way to Count Grendel's castle in Leeds. It's a very pretty place with plenty to do, though £13.50 each is a bit steep - even if we can all use our tickets for the rest of the year.

The castle itself is more decorative than it is defensive, the insides decked out in pastel colours and 30s stylings very like we've seen in Eltham Palace. We felt it all a bit corporate and for those-as-can-afford it, and the Dr railed against its claim to be a "living museum". The picturesque views across the Great Water were somewhat spoiled by the inevitable golf course. 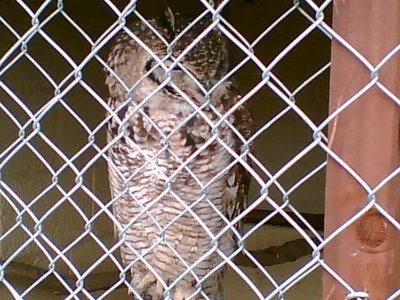 We admired the birds (and a boy-duck waddling nonchalantly around after a girl-duck in the hope he'd wear her down eventually), got lost in the maze and the Dr was upset by the beautiful birds of prey all tied to the ground and looking miserable in the cold weather.

Then it was home to roast lamb from the Dr and Trivial Pursuits that I won. Hurrah!

Today we were out of the place by 10, and dropped the Dr at Rochester station before heading into the cathedral and castle. The castle is much more my period, in a commanding position on the Medway and clearly built with defence in mind. Only £4 to get in, and so much more satisfying. Got a good view of the damage done by King John in 1215 - there's a great big arch that just stops abruptly where one whole corner was rebuilt.

Basically, John lay seige to the place after having been bullied by some not-exactly-democratic landowners into signing a piece of paper letting them do what they liked. This Magna Carta, though, proved not to be worth much; as soon as the rebel lords had gone home, John ran round after them and beat them up.

Rochester castle held out against his army, though, until it was literally undermined. Sir Hubert de Burgh provided a whole bunch of pigs...

"Once the mine was finished, it would have been stuffed with brushwood, straw and kindling to feed a great fire. How the pig fat was introduced is a matter of debate. An older generation of more imaginative historians envisaged the forty-strong herd being driven into the tunnels while still alive, burning torches tied to their tails. Sadly, modern military experts now think this unlikely; the idea of live pigs running around with firebrands attached is just too farcical, even for King John. It is now believed that the pigs were slaughtered and rendered down for their fat, which was subsequently poured into barrels and rolled into the mine.

With or without an accompaniement of squealing pigs, the scene that followed must have been both horrifying and spectacular. Torches were introduced to the tunnels. Deep underground, the kindling caught and the pig fat crackled. Flames started to lick the fatty wooden props and, as the fire grew to a roar, the props started to snap. Suddenly, the ground above the mine fell away. The great keep shuddered and split. With a final deafening roar, a quarter of the building came crashing down."

After stopping off in a tea-shop (and, er, what's apparently the biggest second-hand bookshop in the country), we headed to the more modern Upnor, just up the river.

This is a very different sort of castle - and not really a castle at all what with not having had a lord or been a residence. This is a military fort. And not a brilliant one either; we watched an exciting, low-budget diorama explain how the Dutch had rolled up, sunk a few good English ships and stolen some others in 1667, all under the nose of Sam Pepys.

But there was lots of rooms to explore and steps to climb around, and S. and C. enjoyed themselves. They then dropped me back at Rochester station just in time for a train back home. Just time to write this up before the one with the maggots.

Except for Leeds, quite the "system of the World" tour.

I hope that was an ironic final 's' in Trivial 'Pursuits'.