Window people turned up at half seven yesterday, which was a bit of a shock after a night on the tiles seeing A. off. The Dr scooted into the shower and then into work, and I spent the day making tea and keeping the cat from escaping.

Blimey, I'd recommend Crystal to anyone thinking mature thoughts about double-glazing. Quick and efficient, the whole job done even before the football was over.

(Look, it wasn't like that. Me and the cat were shut up in the living room, which was the one they'd windowed first. And I was tidying up with the telly on. No, really. But goaaaaal!)

Once they'd gone, I did some more tidying (and txtd some Scouser chums). There is dust just everywhere, and no sooner have you dysoned than it's there again.

But the place is suddenly so weirdly quiet - we can now barely hear the trains, cars and youths passing the house. And the cat approves of the window sills.

Then, shagged out, I nestled down with the cat to watch some Quatermass. Report on that sometime else.

Also came up with some pitch ideas, and worked on something that's not going to be easy at all to make happen. Ng.

The Dr rolled in from work and we did some tidying, dusting and unblocked the drain. She also had news that C. is up the duff. Wahey! We were then off to see chums in Greenwich, where much booze and good stew got ate. And I got to play with the baby.

Late up today, but we've got more tidying to do, and a clever bloke coming with a drill to sort out curtain rails. Ah, domestic bliss. 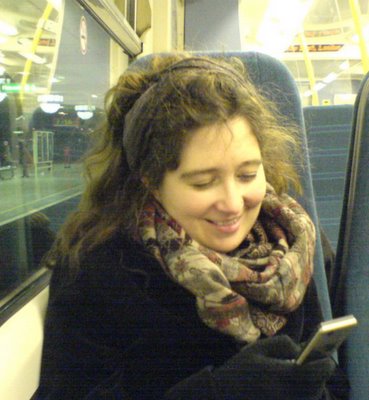 Today just happens to be the sixth anniversary of a party in Catford where I stumbled up drunkenly to the not-then-a-Doctor and said I thought her fantastic. We tend do things today rather than Valentine's day, but this year got caught up with windows. So, just to really annoy her: you're still fantastic, dear.

The picture is by Nimbos, taken on Friday night on our way back from a caff that sold wine (hooray!). The eminent academic and seriously minded sage is cooing over this.