The Tenant of Wildfell Hall, by Anne Brontë 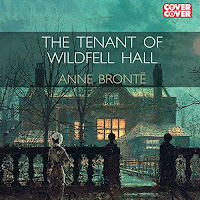 It's taken some weeks to get through this 16-hour reading of The Tenant of Wildfell Hall, which I last read while at university a millennium ago. On 10 June 1847, Gilbert Markham writes a long - very long - letter to a friend explaining how he got together with his mrs. She was Mrs Helen Graham when he met her, and it turns out that she and her son were in hiding having fled an alcoholic and violent husband. Gilbert doesn't know this for some time into their acquaintance, and gets increasingly cross and frustrated as he falls in love...

Alex Jennings reads this version, though one long section - when Helen tells her own story - is read by Jenny Agutter. That underlines that this is a woman's story largely told by a man, but written by a woman. There's a lot on gender roles here, and the constrictions imposed by sex, class and power.

What's more, the conceit that this is an account of events that really happened isn't unusual for the time, but in this case it all feels more credible than the better-known and more goth-fantastic works of Bronte's sisters, ie Jane Eyre and Wuthering Heights. I'd need to read those again to judge whether it's more disturbing when such wicked men and part of everyday, ordinary life.

This novel builds on Anne's Agnes Grey, in which there was also a lot on the awful trap of making a bad marriage. Here, Helen is motivated to escape not by the threat to herself but to the lasting impact of her husband's behaviour on her son. He wants the boy to follow his example, and had him drinking wine and joining in the parties. In that way, it's about not bad individuals but a culture. How strange to be emerged in this as revelations came out about our now former Prime Minister partying through a crisis, "entitled" to do so by culture in which he grew up.