Drunk on All Your Strange New Words, by Eddie Robson 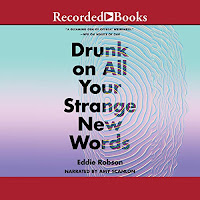 Lydia is a translator for Fitz, an alien cultural attache, but translating his psychically spoken thoughts into English has an effect like drinking alcohol. As a result, Lydia causes an embarrassing scene at an official function and thinks of quitting her job in New York to go home to Halifax (in Yorkshire, in the future). Then suddenly there's a murder and Lydia is a suspect...

This is a typically imaginative, clever and often funny novel by my mate Eddie Robson. It rattles along but the settings, characters and big ideas all really stick in the mind. Amy Scanlon reads the audiobook version very well - there are a lot of characters and accents, but she makes individuals distinct so we know exactly who is speaking when there is dialogue. A real pleasure of a novel.

I've been puzzling over what it reminded me of. Lydia is, I think, the latest in a line of klutzy, plucky young women Eddie tells stories about. In fact, the first chapter put me in mind of the relationship between Katrina and the alien Uljabaan in Eddie's sci-fi sitcom Welcome to Our Village, Please Invade Carefully. And that, in turn, had something of the feel of Paul Cornell's Happy Endings, in which all sorts of aliens descend on a village to attend the wedding of plucky, klutzy Bernice Summerfield - another young woman in a complex relationship with an alien being.

Lydia isn't Bernice and Fitz isn't Dr. Who, but there's an echo of the New Adventures Doctor Who books here - that mix of boggling sci-fi concepts with the ordinary domestic, the wit of it, the boozing (even if it's not exactly boozing). The result is at once dizzyingly original and comfortingly familiar. Loved it.